2017 Most Popular Posts from this blog.

THE MOST POPULAR POSTS OF 2017

10. New interview: "Rookie Sensation from Out of Nowhere" generously interviews me in Paradox Review
Who is Aneka Brunssen? ANEKA BRUNSSEN is a writer, poet and graduate student from Bremen, Germany, with a Bachelor of Arts in Engli...

REASON IT'S #10- Because everyone loves the hard working Aneka Brunssen and also everybody loves Bill Murray.

9. Writers need your help. Buy their books, but here's how you can help without even buying the book
Buying the book is self-explanatory, but even if you don't buy there are some things you can do whether you know the writer or not. All...

REASON IT'S #9-Because I always say, when you do a book signing don't bring book marks or promo-pencils because then they'll take them won't buy the book. If you are THAT person then here are some cool things you can do to help an author without buying the author's book.

8. My poem "Whitewalls" is published in the Rear View Mirror Edition of Right Hand Pointing
The Maurice J. Tobin Memorial Bridge is a cantilever truss bridge that spans more than two miles from Boston to Chelsea over the Mystic Ri...

REASON IT'S #8-It's the year of a new poetry book and Right Hand Pointing puts out a brand new poem. Also RHP is a damn good journal.

REASON IT'S #7-The real story behind Jay Strongbow not being real and Standing Rock HS Wrestler Delaney Lester being real- Real news is not Fake news.

6.. Interview on Mass Poetry site: GETTING TO KNOW TIMOTHY GAGER AND HIS NEW BOOK CHIEF JAY STRONGBOW IS REAL
Today my inteview on   MassPoetry.org is up .   It is something they did with me right after "Chief Jay Strongbow is Real" came...

REASON IT'S #5-Just as Dire Series was celebrated it's 200th event, the possibility that this would be the final event was something that people were interested in.

4. Five Poems in the Fall 2017 Issue of Muddy Water Poetry Review
Brookline was known as the hamlet of Muddy River (a river which today makes up part of the Brookline-Boston border) and was considered a

REASON IT'S #4-It's five poems! Yes. People like them (or perhaps the history of The Muddy River in Brookline is just too hard to resist?)

REASON IT'S #3--People want to read how Doug Holder is like Charlie Rose? (Creepy issues with Charlie's bath towel not known at the point of this writing.

REASON IT'S #2- People really want to see where I'm at for stalking or purposes or this tour was awesome --but not awesome enough to make my book a bestseller.

2017 Year of the Loudmouth, published work in review. 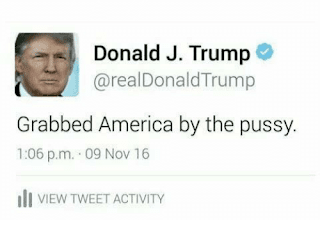 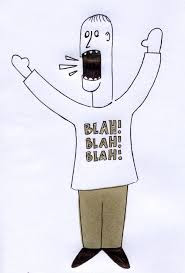 For me, 2017 may seem like a lean year for published work from me, but I've done a lot of that in the past. Most importantly was getting out, reading from and touring the book "Chief Jay Strongbow is Real", a book which I felt so strongly about I could flip through it at readings and read whatever I wanted. The totals were:
1 Book
1 work of Fiction

12 Poems
and more interviews than anyone should have, which is neither publishing nor writing.

2. Mass Poetry, November 13 (where the heckis it on their site?)
3. Koncast, podcast interview, October 27
4. Paradox Review, October 18
5. SCTV , television interview, September 26
6. Boston Literary Magazine, February 4
7. Also there was a recording of a reading in New York City to listen to.

So, there were five interviews--not at all bad, considering the Loudest most vile mouth of all is still allowed to speak, from the highest office in our country (and I don't regret saying anything in any interview). Hopefully 2018 will bring more wonderful things to read, less tweets from our President, unless he is no longer President and I hope he tweets millions of ass-hurt ones.

“Day One: The Day After”
“Red Barn”
“Bringing a Monkey to Work”
“The Truth About Pastels”
"Still there are Boxes"
October 17, 2017, Dead Mule School of Southern Literature

"Prayer By a Stream"
"This, For The Bear"
August 3, 2017 Eternal Snow: A Worldwide Anthology of One Hundred Twenty Five Poetic Intersections
with Himalayan Poet Yuyutsu RD Sharma

"Loose Flowers"
"Throw Certainty Out in the Air like a Lasso"
February 1, 2017 Taos Journal of International Poetry and Art
Posted by ctgager37 at 9:17 AM No comments:

About my reading in Baltimore next Tuesday 12/12 and my best/worst practical joke.

From their website: The Writers & Words Series is a Baltimore reading series, created by local writers Michelle Junot and Michael B. Tager. The reading series features one fiction writer, one essayist or memoirist, one poet, and a “wild card” each month. As part of the reading series, writers & words compiles and produces a zine of the featured readers’ work. Dave Ring will be the lucky "Wildcard" choice.

So there's a zine and there's also interviews by Maria Goodman posted with the features before the event. Mine went up today....just in time for my "quest in" to Baltimore.  All I can say is that I love Baltimore and have been treated right there, from The Baltimore Festival of the Book, where I sold 300 copies of "Twenty-Six Pack" , to the 510 Reading Series at the Minas Gallery, June 2010, where I read from "Treating A Sick Animal"(currently ranked in the Top 11 Million on Amazon). For the write up of that event, it's documented HERE.  but apparently I brought a lot of Pabst Blue Ribbon, five or so months before my sobriety date. 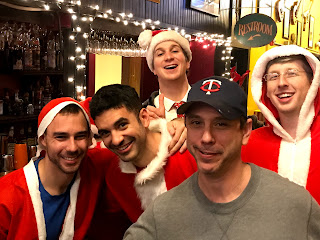 I love reading at series events because they are all different and based on experience they can differ event to event.  Take last week's Dire at the new location. The features killed but we held the event the same day as SantaCon Boston. Oh no, drunk Santas--how I love you, how loud you were, how glad I was that I used a microphone last Saturday.


The link is from the event page, but you can also read it below.

I always hated being told what to write. Book reports…essays…research papers where all assigned in High School and College. When I was 16 I joined the school newspaper, I was writing for the sports pages and I was supposed to write the Basketball Preview. When I assessed the players it read something like Vinnie Scarpello, F, 6’1”, 6’5” with afro. Joe Blow, G, Good ball handler, and actually likes the pizza in the cafeteria. I also was one of the few that could touch type, so I ended up being an Editor and earning the Smithtown East Journalism Award.

Infinity. It’s done when it’s done. It may need more drafts if I’ve written a really rough first draft. It may need more if there are more plot or arc revisions. It may need a few set of eyes because I like to farm line editing typos out because I’m just too damn tired at looking at the manuscript and I’m useless.

Favorite all time is Catch-22. I modeled my first novel after the chaptering style, the switch of characters and the humor found in some very serious subject matter. It is Joseph Heller’s work of genius within his total body of work.

Depends on what I’m writing. For a novel, someone walking up to me and talking about the book—and not just ass kissing. For poetry, hearing that sigh right after you nailed a poem in front of an audience.

That’s a tough one, but I love words which have double meanings and I love puns. Both those types of words give pause to think and to laugh.

Bonus question: What’s the best / worst practical joke that you’ve played on someone or that was played on you and how can this shared experience shape the world?
Once I worked in an isolated office for a company called, let’s say ABC Industries which worked next door to a company 123 Industries. It was so isolated that had to get in our cars to get a soda, coffee, or lunch out. One day a soda machine appeared in the hallway. Our office was ecstatic, and people were playing it up. “Who wants a soda?” and “Ahhhhh, Coke.” Totally yucking it up—so I just had to fix it.

I got an idea, how to burst the bubble—I posted a sign on the machined which read—THIS VENDING MACHINE IS FOR USE BY 123 INDUSTRIES ONLY. NO ONE FROM ABC INDUSTRIES IS ALLOWED TO USE THIS MACHINE.

Anyway. Word spread fast. It spread to our now grumpy employees, all the way to the office manager who storms into 123 Industries and has a red faced tirade. Oh no….I thought. I’d better stay silent on this—I’m in dangerous disciplinary action mode. The next day the machine had been removed. So, I’ve stayed silent for about 25 years and not told anyone about this until now.
In terms of shaping the word, I say, honesty is the best policy, unless it hurts yourself or others.
~
I feel pretty honored that this 25 year secret has been now shared with the world via Writers & Words interviews, thank you for trusting us, Timothy.

Dire History-A Goodbye to Out of the Blue, but I hope to see you anew. Hello to The Middle East

Sadly finances forced The Out of the Blue to close 12/1/17, but they promise to be back, sometime, somewhere and hopefully soon. I am deeply indebted and am so grateful for my relationship with them, starting back in 2001. Hopefully not a goodbye, but a see you later.

So here's the Dire history--location only. 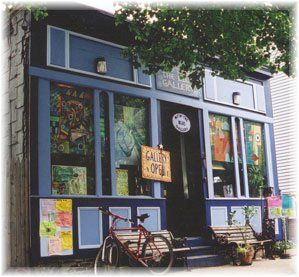 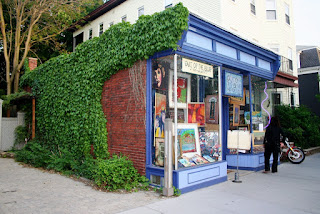 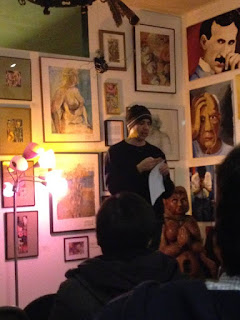 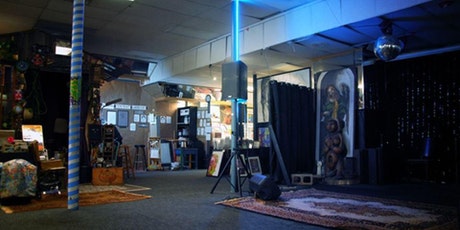 
As you can see, exactly 198/200 meetings of the Dire Series was held at the Out of the Blue Gallery, 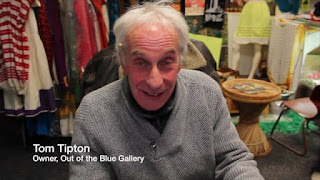 in some form or another. If and when they relocate we'll give it a go there as I've had an amazing relationship with Tom Tipton (right), the proprietor and friend. 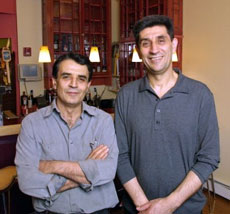 The Middle East, with their generous owners, Joeseph and Nabil Sater (left) have supported the Out of the Blue for years. These gentleman also have a reputation for supporting individuals, such as broke or troubled musicians by giving them jobs and helping them back on their feet, which they humbly would never admit.

When I approached Nabil to host Dire at The Middle East this Saturday, all I had to do was ask--it took less than a minute. Seemed like a good match--a series in need and a location owner with a big heart. It's a temporary home and I could be asked to leave at anytime....which has never stopped me before. So tomorrow at 3 PM, we do it again--very much hope to see people at the new location, date and time!
Posted by ctgager37 at 11:55 AM No comments: