Editing (more like cutting and pasting): The grittiest piece I've ever written on NG. Here's the schedule.

Over at New Graffiti, where I roll as a blogger and editor,  I've hand picked writers to submit the grittiest piece they've ever written.

Many have come back with the question, "What do you mean?"

My response to them: "Hard hitting. Something so raw that you're uncomfortable or would be uncomfortable reading it aloud in front of a small group of friends or (gasp) family members."

So far the publication date line-up, which takes me up to November 2013. 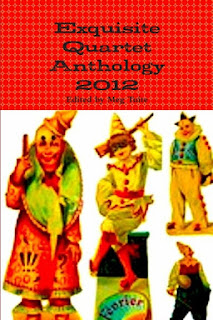 Meg Tuite is at it again. I told you about the piece I worked on with Meg, Dena Rash Guzman and Robin Stratton last month. The anthology of all the Equisite Quartets throughout 2012 is now available.

Here's the rub. If you like, you can purchase it here

THE NEXT BIG THING

Nate Tower from Bartleby Snopes
made a data base for this

So, what is the Next Big Thing? A series of questions for writers. The rules? You post answers to the questions below on a Wednesday, and then tag other writers you admire and want others to discover. I was tagged by Lavinia Ludlow who authored “alt-punk” and the soon to be released "Single Stroke Seven" And so it begins…

Question: What is the [working] title of your book/work in progress?

Q: What is a one-sentence synopsis of your book?

A: A story a man whose job it is to help people, but in reality, he is inept, sarcastic, and each and every day represents something to get through.

Q: Who or what inspired you to write this book?

A: I wrote a flash piece of about 500 words called "An Angry Psychologist's Wednesday Appointment". I was able to expand it by 88,000 more words.

Q: What else might pique the reader’s interest in your book?

A: The characters and how they change---their recovery with or without Bill and finally Bill's transformation.

Q: Where did the idea for the book/work come from?

A: I enjoy quirky people in my own life. Originally it was going to be a novel in flash but now it's a novel formatted in quick short sections.

Q: What genre does the book fall under?

Q: Which actors would you choose to play the characters from your book?

Q: How long did it take you to write the first-draft of your manuscript?

A: About a year but 75% of it was written in three months

Q: Will your book be self-published or represented by an agent?

A: It will be anything but self-published.

A new kind of announcement: Old work unpublished by Squawk Back!

We regret to inform you that we have decided to pull your piece, Fireworks , from Squawk Back's archives. Please do not take this to mean that we did not at the time, and do not currently, thoroughly enjoy your piece: our decisions have been informed more by whether a given piece fits well with the overall aesthetic of Squawk Back, less their aesthetic merit,—in which we, undoubtedly, believed when we selected them for publication.

Therefore, we enthusiastically encourage you to re-submit this piece to other publications in which it may be a better fit—which would be especially advantageous for its author, as having your work buried in the archives of a publication with whose tone it doesn't particularly accord redounds to neither our abilities to promote and disseminate a uniformity of content; nor your own, to provide content appropriate to a given publication.

2) WOW! You're RIGHT! It IS amazing that I'm trying to run a literary publication that isn't an abysmal piece of shit littered with undercooked subpornographic literary farts. God, I mean, WHO COULD BELIEVE that I might regret a hasty publication choice from a year and a half ago when I published a new issue every 5 days and hence the standard was a lot lower.


and then later this?

3) Timothy, the only reason I dislike you is that you were incredibly rude to me whenever I interacted with you electronically. If someone told me he disliked me, and I had no idea why, I would probably ask him, or represent to my fan page this inexplicable and strange turn of events. I can't help but feel that your reaction suggests that you knew why.

I guess they weren't telling me how they really felt.  After I read the first e-mail it seemed like it was their way of communicating that there was a dead link. Journals and magazines have the right to archive anything that they want, even if the rest of the issue was kept in tact. Yes, I was disappointed but when I went to check the dead link I was greeted by a video of a laughing dog. At the time of publication he was very positive about Fireworks, tweeting,   "A disconcertingly sexual prose poem".  We've come a long way to get to "undercooked subpornographic literary farts."

Then I reread the e-mail and very small, under their tag lines were the words ( p.s. I dislike you) . As I've mentioned, it's fine to do what you'd like with your journal but the smug and insulting way it was done was pretty amazing. I was still in the dark about the big picture, as number two and number three statements from above have yet to be posted.

I hate being in the dark. Might it have been a mistake? Who dislikes me and why? I had to check on the editor, as maybe it was someone I may have pissed off. The editor was Zak Block whom, to my knowledge,  I've had zero interactions with but upon further review he had blocked me on Facebook.


So I went public and received a lot of support--none on the merit of the work but rather that "it was a rotten thing to have happened to you", like a car running through a puddle and soaking you at the curb. Some posted a screen shot of the cache and posted it on their pages. 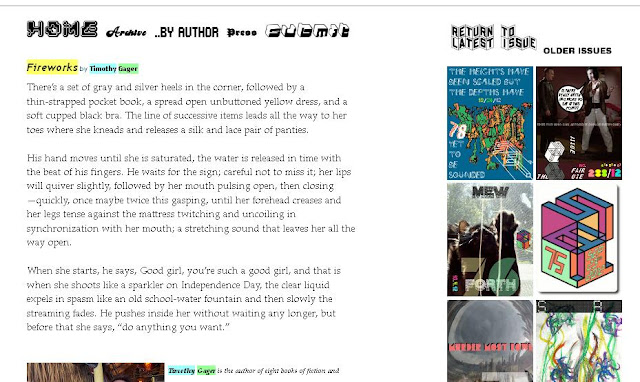 Obviously the word got back to those folks at Squawk Back, as they posted the "WOW! You're RIGHT! " status on their Facebook page. Interesting that there was also another post that either either rightfully kissed the ass of or complimented in a backhanded way, Roxanne Gay, who openly commented that their staff's handling of my being unpublished as "unbelievable".

Still, I have to ask, if the powers at Squawk Back disliked it so much why did they publish it in the first place?

Was it this?
"...whose tone it doesn't particularly accord redounds to neither our abilities to promote and disseminate a uniformity of content; nor your own, to provide content appropriate to a given publication"

Perhaps. Or was it this?

"God, I mean, WHO COULD BELIEVE that I might regret a hasty publication choice from a year and a half ago when I published a new issue every 5 days and hence the standard was a lot lower."


WHO COULD BELIEVE a new magazine might be ok with lower standards when they are in a rush to publish every five days and such. It seems to say, "we published work we considered not so good, but now it's going to be better." Why bother publishing it to begin with? Again, I don't care if you like or dislike my writing or if you like or dislike me but if you claim to "run a literary publication that isn't an abysmal piece of shit"  All I care about is the professionalism in which you dealt with  me which appears to be quite abysmal.

Personally, I'd rather not submit to journals that seem glad to welcome you and then, later, throw you under the bus. I have a slight negative opinion on that. I also have a slight negative opinion of on-line journals that don't archive to begin with, but it's not going to ruin my day if that's all upfront.  I understand that it's a case of archiving and bandwidth which can be expensive--except, of course, if it's a free blog your posting on, or perhaps not being lazy to move work to a free blog--either way if you are going to archive, then please archive.

I want to stress that the removing of work in itself is less of a big deal then the disrespectful way it was done. There is a way to point out that you smell badly without leaving a bar of soap in your locker with a note that says, "Here you go, smelly." Honestly, you might be doing me a favor by removing work of mine from the internet that may stink up the joint.


If my three paragraph flash piece no longer existed in the world it will not make or break my writing career or my goals for my writing. One single opinion that my work is not up to snuff will not discourage me to write any more or any less but what I bring out of this is why would anyone publish with a journal that may unpublish them at any time in the future? Maybe it was because I was rude at some point, a point that I don't remember but Zak Block later mentioned on Facebook:


"it's not relevant because it isn't why I pulled the story."

Post blog, 11:30 AM:
Statements numbered 2 and 3 have been removed or deleted from their site. Also the post about Roxanne Gay was removed. That's good stuff right there.

Post blog, Part 2, 12:55 PM:
I heard from Zak Block who said I could share "Anyway, I read your blogpost and everything you said is pretty much accurate, I have no complaints and am more than willing to admit that I was wrong and might have been taking a few liberties of the imagination in inferring your electronic conduct as rude, for which reason I apologize. (This isn't intended to be a confidential apology, I am more than happy for you to show it to people.) Sorry again and happy trails." 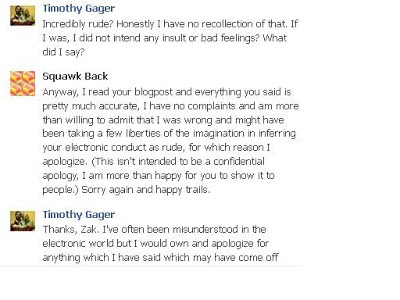 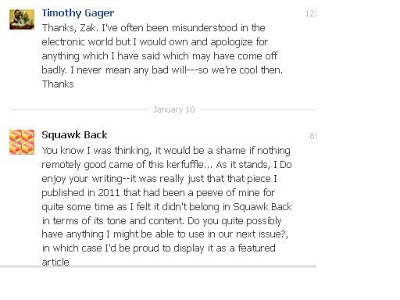 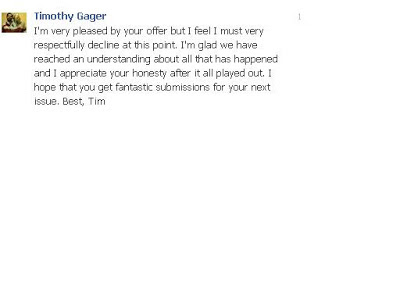