Dire Memories: 15 Years and Always in the Opposite Direction

Has it been five years since I last wrote of Dire Memories? A lot has happened at Dire since, but also in the crowded world of writing events in greater Boston and beyond.

The Dire Literary Series, when it began in 2001, was a one of a kind fiction series. Basically, for long running series there was Stone Soup, The Cantab Slam and The Lizard Lounge Poetry Jam, all  poetry events. Dire was a fiction open mic where you could and still can read for 10-15 in an open mic. We had beer, Dire de Mayo, and even an open bar, (drink as much as you want for a set donation price). The series was described as a party in your living room with drinks or a friendly neighborhood bar with readings. It was a series that went where others did not. Basically that was the gimmickry, from 2001-2014, but first and foremost it was about the fiction and poetry---the talented and big name features who came as our guests. We have featured Pulitzer Prize Winners, Massachusetts Book Award Winners, Poet Laureats and PEN New England Hemingway Award Winners. Features have come as far as The Himalayan Mountains and as close as Cambridge. We have been incredibly lucky to experience such talent and diversity.

Slowly, the series evolved, and my fear of it not surviving as one big party proved to not be based in reality. People came for the features, the open or both of those. The features were all published authors with books, but there were a few exceptions, which were people I knew as amazing writers. At the time of their features, this list included Steve Almond, Billy Geraldi, Bruce Machart, Rusty Barnes, Nadine Ryan and Teisha Dawn Twomey. All of them now have books, many of them more than one. 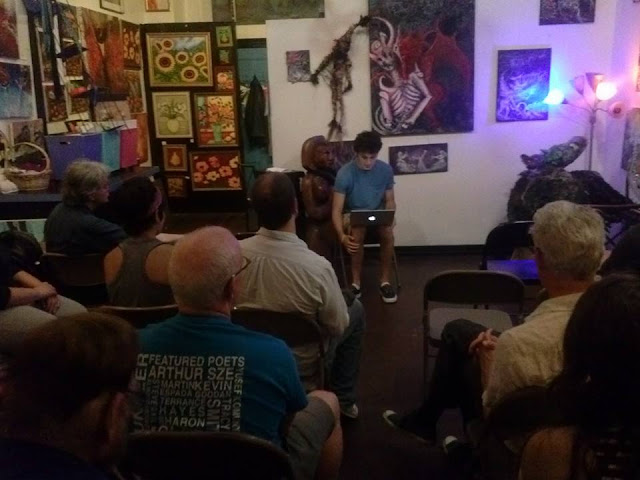 In the fall of 2014, The Out of the Blue Gallery's location at 106 Prospect Street in Cambridge was faced with a huge rent increase. The little gallery that could, couldn't with it's small size, generate enough revenue for triple the rent. They had tried various ideas in that small space such as intimate musical events, yoga and body painting. They even changed their name to Yarrow for two months, where there was less light and less art on the walls.


Meanwhile, back in Massachusetts and the rest of the county, more and more series popped up, most of them featuring special guest writers or poets but also, receiving equal billing for the evening, was various gimmicks--music, karaoke, age ranges, dressing a certain way, celebrating certain made up occasions and various drinking things to do. (See or google  AWP off site events) Often a tagline of "get drunk and hear"...or "enjoy a cocktail..." It all seems pretty cool to me on the outside, but internally I thought, why not just stress the writers and their accomplishments first? Could it be fear based, perhaps the people running the event don't think good writing will draw their crowd, because perhaps their crowd isn't much for literature. Is there a fear that just plain good writing won't draw people. I know bookstores present readings and the attendance is solely based on the author's ability to draw a crowd. On the extreme end of this example would be Steven King. Somehow I doubt any sort of gimmick is needed. Tonight: Bowling and Steven King--followed by drinks at The Beer Frame Lounge, where the first drink is free if you wear a costume....

The new, Out of the Blue Too Gallery opened in the fall of 2014. It's right on Massachusetts Avenue in Central Square and it's huge (the former location of Blockbuster). The mere size allows flexible set up 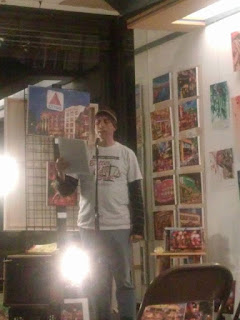 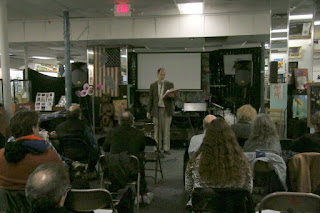 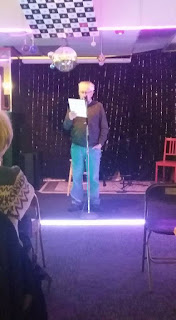 They brought Stone Soup, (now run by Chad Parenteau) and Dire with them. They brought the hard work of Tom Tipton and TJ Edson with them. The brought in artist studios, music and live band nights, nearly every night of the week, at a time where live music venues are closing. They have a liquor license on certain events, but other than that, Out of the Blue Too is alcohol free, no BYO, but totally by the book. The Dire, itself was now strictly based on writing, but I did let Nadine Ryan, when here book was released take over Dire and boy, did we do some funny/interesting/ skits, improve and the Match Game! To find out more about that happening, click HERE.

At it's onset, The Dire Reader Series (as it was known then) featured two 45 minute features and eight 15 minute open mic, which has evolved to three 10-15 minute features and 45 total minutes of open mic. we also moved from 8 to 7 PM and we are out at 9, home by 10 PM even. Dire will continue to evolve as long as there is an interest in reading and writing. Who knows, I may get crushed by the next wave of party-type events or interest may wane. Currently I'm booked nearly all through 2016, but if interest wanes, and as Arnie Grape says, "I could go at any time." It's been a great fifteen years and here's to the next fifteen.