Year end Top Ten lists are kind of silly, so what the hell, why shouldn't I join in the "fun"? Without any further verbiage, here are the most viewed posts from  2012, in reverse order with a quick comment about why it made the list.

Reason: People love the little prince and if you have insomnia you were up at all hours reading this post.

9. New Lummox Journal available--235 pages and my poem "Walking Out of the Woods".

Reason: People love to google themselves. This post lists a huge number of the contributors, editors, etc. Lummox also came back after hiatus and there was some interest in that.

8. Chiller in "In Between Altered States 23"

7. Behind The Music, "This Tornado Loves You" in JMWW

6. It's a small world (after all)--Paragraph Line publishes "Their Own Planet".

Reason: People have fond memories of the It's a Small World Ride at Disney. I remember hearing a story about someone stuck inside that ride when it malfunctioned. They were directed to wade out of the scuzzy water after a few hours. I bet they read this blog!

5. It's not a hoax! Right Hand Pointing publishes "The Lottery Winner"

Reason: What do you get when a viral facebook post from a fake gazillion dollar lottery winner meets a great publisher in Right Hand Pointing, meets massive reposts by great supportive people? That's right, the number five most popular blog posting!

4. Today at New Graffiti I discuss screws ups and their implications

Reason: People love a good screw up. The irony is that this post only redirects to the story of the screw up I named in the New Graffiti blog.

Reason: People were damn curious about my sobriety. Was the story about that? No, but the story has many satiric references about a fellowship I know and love .

Reason: People are interested or people are stalkers. Pick one.

And the number One most viewed blog post of 2012

1. In Between Altered States publishes, "No Sex Since Last Spring"


Just so I don't fall behind on the list for making lists in 2012, here is my full list of writing credits for the year.

Numbers wise, it was pretty good (46 widgets)--not my best year, but quality wise I feel very good about the year I had. Lord knows, I love numbers.

"Sometimes There Are Things Which Come Out of the Darkness" , November 14, 2012 Oddball Magazine

"Some Things You Might Not Have Realized" , October 27, 2012 Unshod Quills

"You knew me before"
November 5, 2012,Gutter Eloquence

"No one really knows when it Happens"
"Ironing Under an Old Dusty Picture of a Wheat Field"
"Love Affair"
October 24, 2012,Zig Zag Folios, Print

"reply to the grumpy cashier at the fast food restaurant"
"Exclamation for a Separation which happened long Ago"
April 4, 2012 Fried Chicken and Coffee

“My Girlfriend’s car is officially dead”
“reply to someone who said there’s a lot of not-happy going around”
“This IS Bitchin’”
“Wait-You Can’t Hide It.”
"Missteps"
March 2, 2012, Dead Mule School of Southern Literature

Does not play well with others except Tuite, Guzman and Stratton

Doing things around the holidays with groups of people becomes a Christmas party. Sometimes you can't dress up or take Bob Dylan anywhere

In the past I've written and published works of fiction with Elizabeth Rawlins (1, 2 and 3), Renee Angers with one recent and yet unpublished story co-written with Teisha Twomey. The process of each of these have involved writing back and forth to and at each other.

Meg Tuite (she seems to be everywhere) oversaw an equisite corpse holiday story today in Used Furnature.  It had a few attempts that I was not up to snuff with. In the first attempt, I transformed a sex trade story into Cinderella. That didn't work. The second attempt I was supposed to end the story and I turned the character I was working with, Sally, and disguised her as Santa Claus for the party. Again it didn't work. I concluded I work much better when I do my own set-up, arc and ending. (I don't play well with others!)

The story came out today and like opening a surprise package I was thrilled to find out that I had written with Dena Rash Guzman and Robin Stratton.


Other holiday collaborations aren't as good as ours! Take this one made with "103% love" Ho ho ho!

It's not a hoax! Right Hand Pointing publishes "The Lottery Winner"

I have a new story, "The Lottery Winner" up today at Right Hand Pointing #58. It's a winner. It is unlike  fake winner Nolan Daniels who put up on facebook that he won the Powerball Jackpot. It baffles me (actually it doesn't) that people believe things at face value. It baffles me further that people like Daniels goal in life it seems to be "to make something go viral". He should start screwing without a rubber then. 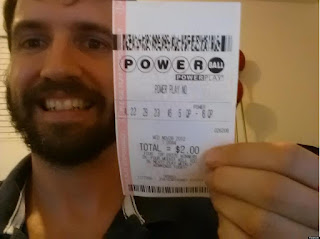 It is also unlike, Shirley Jackson. Here she is reading her famous iconic piece,"The Lottery" in two videos, Parts 1 and 2. She, unlike Daniels, is not a douchebag


As for my story own story, here's the rub: Any portrayal of douchebags real or imagined are purely coincidental. A lottery winner deserves to dance, right T?