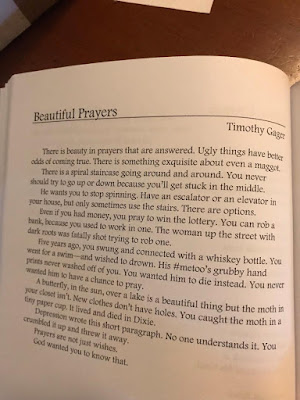 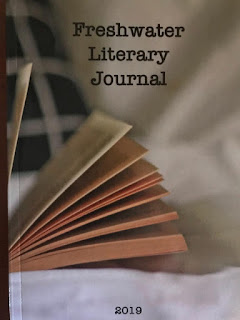 Asuntuck Community College is where John Sheirer teaches. This is where you can check out his books.  I know, I know, Amazon link, but don't judge. John and I go way back....a few Dire readings, a benefit reading for Scott Horvath, and we also share the same publisher. Here is John, author Jay Atkinson, and myself from 2005. (Nice vest, Tim, and damn I wore that jacket yesterday. If Leather jacket=cool and Leather vest=not cool then Leather sleeves=very cool.) 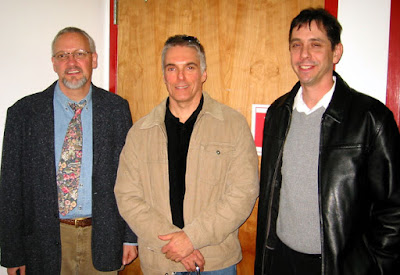 Freshwater Literary Journal is the annual literary magazine put out by Asuntuck Community College. The journal is full of work from students and others, such as myself who went through their submissions process.

The story behind Beautiful Prayers is a piece about trauma. Prayers can be beautiful but life can be difficult and ugly. The piece mentions a lot of really difficult situations in less than 300 words. We have a lot to pray on these days, and I pray that prayers work. Most of all, through #metoo, depression, bank robberies, and the lottery, there is always hope.

Speaking of going way back, this is my first published flash fiction since Every Day There is Something About Elephants came out, over a year ago.
at May 15, 2019 No comments:

"This Poem is Like a Bruise," published in Live Nude Poems

Today I'm pleased to announce that my "This Poem is Like a Bruise," was published in Rusty Barnes and Heather Sullivan's Live Nude Poems. This duo has always supported my writing, Rusty for almost twenty years now. It is an honor and a pleasure to have these talented people as friends.

This poem began only as a tittle which jumped into my head when I was doing who knows what. Honest---I don't even remember. . What I know is that this poem is an attempt to write about the feelings of bruised psyche, ego, confidence, or self-worth OR it is a hopeful view that our political climate man end soon. (?) My real life take away from all of it: Feelings come, and every time they go away, just like a bruise. Fact is, I don't remember if it was intended to be about bruised internal feelings, our political climate, or recovery. It works for all three---there is hope that all three can end positively.

The poem and meaning behind it starts in a  visual darkness. I've never seen anything as dark as a riled up Lake Superior in my entire life. Superiior, a massive dark lake when there's a storm and the wind is strong--it's waves and whitecaps thrashing, is perhaps the most evil image one can experience in nature. It poem though, ends on hope; a hope you can pin, leave at the top, as you know the original feelings will dissolve, like a storm, like a bruise, and  like a coin flip, going either way, it's only a maker of time before "heads," or "tails," will come up.

Here's something else. The other day I was describing some sad situation. My friend suggested, there's a poem in there, but at the time I felt there was some flash fiction coming out of it. "Well," she asked, "What's the difference?"

Great question. For me if the feeling is more intimate it will probably start as a poem, but if it's more narrative in feel, then it'll more often than not become a story. I'd never thought of my process in that way, but, for me, that seems to be the way it works.

New movie interest for my novel? Let's preview this information. 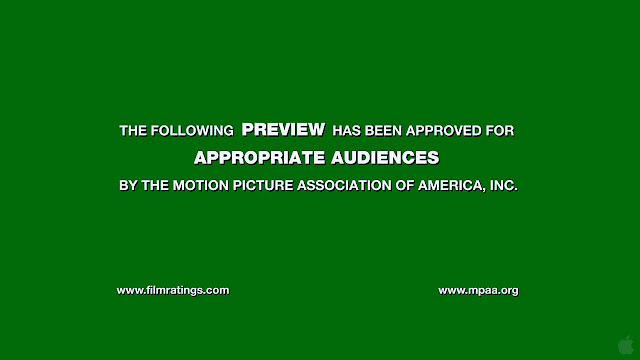 According to a blog, here's how often you should blog (they have a blog and they consider all of these things.) Wow. Circular. Head explosion.


Here are six things to consider that are more important than how often to publish a blog post.

So here I sit---nothing since March 11. No news. Nothing published. No agent for Joe The Salmander. I have some readings coming up, but I always have those.

So lets start with the REAL NEWS, because what people might be thinking is FAKE NEWS. There is The Thursday Appointments of Bill Sloan into a feature film. For a quick review of everything having to do with this book search for 'Sloan' in the search box, top left, or just use THIS LINK.
new interest in making my novel

People are really excited about this news and are thinking this:

Which is great. It's good to think big, as most non-writers think book readings are like this (I'm not being critical of anyone, just so you know): 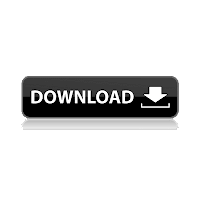 In terms of progress here's an example of how it stands in total progress. When you download something and you get the window of percentage of the progress of the completed download...I'm right here. I've just decided to hit the button


So what does this mean?

Well?
1. This will need many steps to get from here to a screen. They involve, money, creativeness, and pure luck.

2. Not one word of a screenplay is down on paper, but there is an experienced screenwriter ready to work with me. Meetings and ideas are happening soon. I can't and won't reveal any names, at this moment.

3. No contracts have been signed but the interested production company is interested. Again, I can't and won't reveal any names. The good news here is that it's a small indie film company, which has produced and released actual movies. If made, this will not be a Hollywood movie and may not get screened (another challenging step) unless a lot of noise about it happens, such as huge word of mouth, and interest from other important entities such as top mention at film festivals (two more extremely challenging steps-getting in, getting attention-winning- Yes, check the videos above----this is winning the lottery)

So what are my expectations? I've always wanted to see Bill Sloan on screen even if it's from a film-making class in Middle School. I just think it's exciting. Obviously this is a low bar, but it's not about becoming famous---it's about creatively looking at something which started in the mind, then ended up on paper, then ended up on a bookshelf , and finally, perhaps, being something shared visually.

I can say that in my life I've been extremely lucky and things have actually happened. I've been in popular bands, written fourteen books---who gets to say that? It's not a stretch to say that this could, and may happen just because I am pushing for it. Let's see how it all plays out.