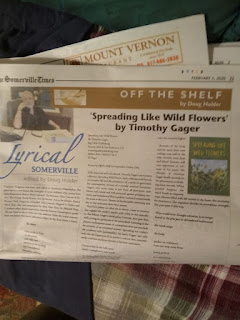 Dennis Daly is a review/correspondent for The Somerville Times newspaper. In their February 5 issue, he reviewed Spreading Like Wild Flowers in Doug Holders, Off the Shelve column


Here's the link but the online formatting of the paper changed how the lines looked, so I will attempt to fix it by posting below. 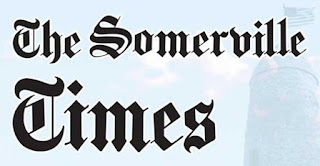 Well-titled and well-introduced, Timothy Gager’s new poetry collection, Spreading Wild Flowers, both celebrates and broods on everyday life and the persistence of a medieval-generated, but contemporary version, of a morally centered Everyman. Gager’s wiry verses come at you from all directions, each bloom well-rooted and well protected against predatory aesthetes and lackadaisical flower pickers. Lushness seems beside the point to this poet. Themes of hardscrabble continuity and day-to-day endurance drive these poems. 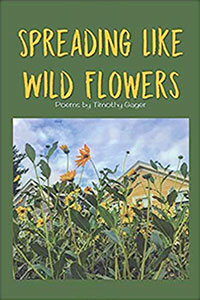 Spreading Like Wild Flowers
By Timothy Gager
Big Table Publishing
Boston, MA & San Francisco, www.bigtablepublishing.com
SBN: 978-1-945917-58-
552 Pages
Good first poems are often set to convey a tone or emotion that engages the reader’s psyche with a key to the miscellany that follows. Gager’s initial piece, Concerto, does just that, while serving as a guidepost to the immediate. Listening to the plaintive and insistent music of a saxophone does not preclude the intrusion of an unwanted serpent. Spreading out reality’s old comforter with (presumably) his lover, Gager, not only seeks the raw enjoyment of an outdoor concert, but, concomitantly, confronts insidious threats to his best intentions,

I became lost in the bell curve,
which a saxophone’s note made

me contemplate: please stay present
because I found this watching out

for snakes is something celebrated.
Will you ponder a geometrical illusion?

Area and circumference?
The formulas? Always the formulas.

Bromley’s Funeral Home, Gager’s memento mori poem, staggers its reader like a sucker punch. The piece’s simplicity belies our poised acceptance or quiet response to the dearly departed. Our myths and well-meaning suppositions melt in the face of mortality’s starkness. Gager here contemplates a tatty funeral card and it’s not going well,

…your face creased
On a piece of wrinkled cardstock—you were
so young, but the memory so ancient,
Bromley inserted a few lines

from an ancient Catholic Prayer
printed over a cliched picture:
Heaven’s light beaming down.
Or is it shining up? I can’t question this,

or understand a damned thing

In his poem The Last Time I Saw You, Gager reconciles or attempts to reconcile remembrances with his once “present” life. The poet’s persona recalls the horror of drug dependence in words seemingly dictated by the “loser bird’ in his head. All the while Gager punctuates this poetic anti-world of his with unpleasant smells (dead mice and acrid gas) and sounds (snorting and sniffing) heightening the piece’s earthiness. The poet mourns the loss of a lover, who has found a new kind of happiness in sobriety, with mixed emotions. Gager ends his narrative wonderfully underfoot with first rate imagery,

Six months later, I heard you lived in N’Orleans,
married an unveiled version of me, with all my “yets”

still to come, worse than all those
wretched “nows.” I feel I can’t stop

from mourning you, or the sidewalks
from cracking, my stumble toes catching

that uneven place where elm roots
raise the concrete higher.

Revivals of the body and the spirit from near endings may well be the only miracles most flesh and blood humans will ever experience or witness. In his poem The Miracles of Recovery, Gager dwells sparsely on the phenomena underlying these marvels. When survival happens the mind bends in unpretty ways. Blooms filled with life retreat to the basic, the necessary for sustenance. The organism shrinks to consolidate strength. The poet puts it this way,

Who would have thought salvation is no longer
found in the piss jars in old isolated bedrooms?

quakes its resistance.
I am one step away from

being pushed
in a wheelchair

when my body fails

perhaps just wilts
as a petal, the rose might—

we are all stem, we salvage
ourselves from this withering.

Throughout this collection the poet exhibits a mix of raw images and damaged contemplations. It can get exhausting. In his poem Faith, Gager reaches an oratorio of exhaustion, a creed of despair, or perhaps, more pointedly, an enlightenment. The poet contemplates,

I wonder why
everything has to be.
And I’ll never wonder,
if we will go on forever.

And I believe,
one day, I will close my eyes,
to pray—for nothing horrific to happen,
again and again until the very last breath.

Connections of a Bridge, Gager’s poem about new beginnings, moves in metaphoric wonderment from fear to hope. I especially like his stanzas on the Lake Pontchartrain Causeway, where illusion merges into realty until police intervention becomes necessary, and the Beverly-Salem Bridge, where the soft curve of the connector inspires remembrances of new love and upbeat anticipation. The poem opens as an anthem to all such thoroughfares,

I cannot look down from above,
driving eyes locked forward to
where I’m headed, water underneath..
The banks are afflicted with ugly
six-pack rings, oily vermin, and shopping carts.
But there’s also marshland with wild flowers,
a shadow spreading from her structure
shading ex-lover’s torn blankets. I miss
the beauty within these passages.

Ripped and torn in the world’s thorny bracken Timothy Gager has bridged his way out and across to the promised, but not perfect, land.  In the process he has delivered his readers a book of searing poetry and redemptive hope. Bravo!
Posted by ctgager37 at 5:56 PM No comments: