With Spreading Like Wild Flowers due out in late October, here is my line-up for appearances---more to be announced. 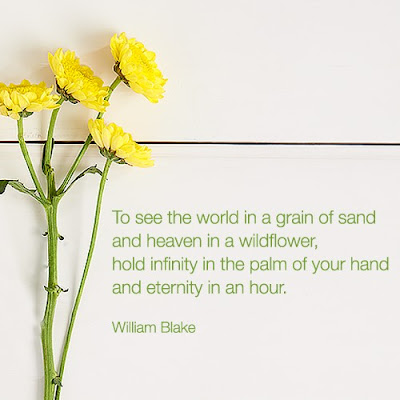 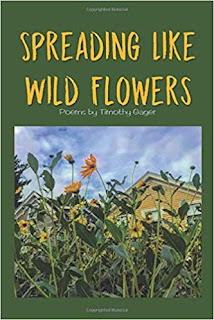 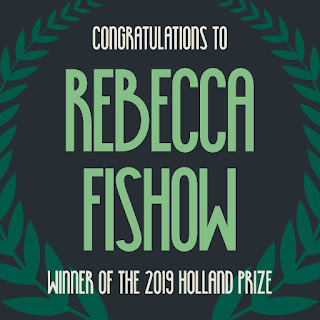 The winner of the first-ever Holland Prize for Fiction from Trnsfr Books has been announced!

Look for Rebecca Fishow's stellar debut story collection The Trouble with Language in 2020!

Finalists Dan Hoy and Mike Kleine's collaborative novel Where the Sky Meets the Ocean and the Air Tastes Like Metal and the Birds Don't Make A Sound will also be published in 2021!

Cheers to these incredible semi-finalists:
- Timothy Gager (for Joe the Salamander)
- Brooks Sterritt (for The History of America In My Lifetime)
- Christian TeBordo (for The Last Days of Science)
- Joan Wilking (for A Sign of the Times)

I don't mind losing to the people on this list---Rebecca, Dan, and Mike get well earned books. I get to blog about not minding the results (bad joke. Too soon?) . Side note...on May 4, 2018 Rebecca and another of the Semi-Finalists, Joan Wilking all read in New York at KGB, F-Bomb Series. Joan and I drove down together from Massachusetts  and had the BEST time. Lot's of laugh and really bad food at 2 AM on the way home---all was open was a KFC and all they had was "Big Bowls." The  food was the actual punch-line.  Somewhere, May 5, 2018, on Route 95 North....chicken, mashed, corn in a bowl ended up in my trunk.


Joe The Salamander (69000 words) follows Joe, a quirky man, mostly, from birth through age eighteen. Joe, a born people-pleaser, only chooses to say the word, "Yes," to everyone, except his mother, Mille, who he has unconditional trust with. The other woman in his life, Laura, his nurse on-duty at the time of his birth, becomes a life-long friend of his and his family.
Joe, overwhelmed by loud or extreme stimuli gets through life by wearing various costumes but loves Superman in his various television/movie forms. As he gets older, he finds comfort by wearing a Superman costume under his regular clothing. It is only after his parents die tragically on 9/11 that Joe stops feeling safe through the Superman strategy, because even Superman couldn't prevent such a catastrophe.
Throughout the novel, Joe's inability to successfully interpret life's sights and sounds, combined with his singular word language use, causes him to be placed in situations which work out in ways, not intended. His mother tries to increase Joe's independence so he could eventually survive on his own, but after her death, Joe is left to figure things out on his own.
As he hits his mid-thirties, and entirely by desperation, he goes to the local costume shop to buy the bigger, and better Superman costume he had seen to help him to re-enter society using an old coping mechanism.
Joe The Salamander, takes a sensitive, and human look at what it is like the stimulus of the world are challenging, and also how misunderstood and beloved people are within the spectrum
Posted by ctgager37 at 3:38 PM No comments:

THIS is the cover for soon to be released, "Spreading Like Wild Flowers"

Finally here is the front and back cover of "Spreading Like Wild Flowers." I expect the book to be out in November, which is just in time for my readings in Dorchester and New York. 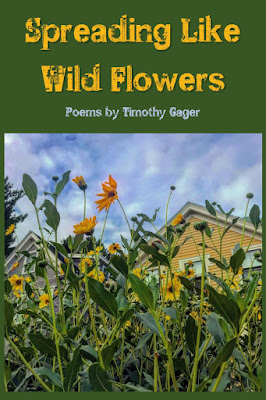 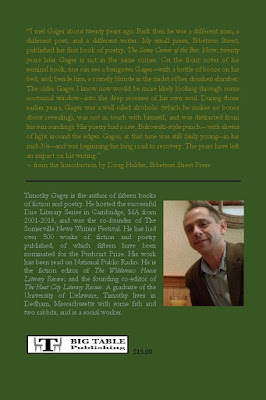 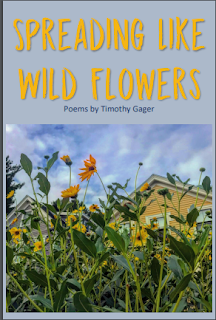 This replaced the less dramatic blue one. It had the wild flowered photo, but the light blow wasn't very "strong." 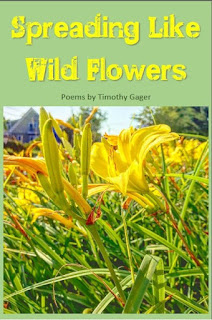 Originally I prematurely announced the cover this pale green one, with the old, less wild flowered picture. It appeared on my website until today.


The very first model was the one I made myself....which is very rough, but it gave my publisher an idea of what I was thinking. Here it is below.  Well, I hope you had fun---because I sure went crazy. 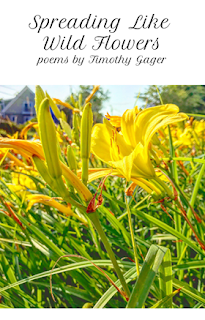