As far as independent books go, who does Ben Tanzer check out? ( * ) 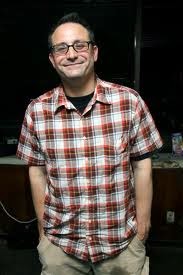 
When I first read this question I thought about that famous New Yorker cover where it shows New York City as the center of the universe and the rest of the world sort of slowly unfolding under the shadows of the city’s awesomeness. This wasn’t because it made me think of New York City though, it was because it made me think that to answer this question I had to start with Chicago, because while there is a lot of indie literary things going on everywhere these days, I’m not sure it compares with what’s going on here. How’s that for grandiose? Still, and I am bound to leave some people out, but starting with Chicago there are really so many indie writers doing so many cool things to check out, Lindsay Duncan, Robert Duffer, Spencer Dew, Gina Frangello, Lauryn Allison Lewis, Brandon Will, Jason Fisk, Victor David Giron, James Tadd Alcox, Kathleen Rooney, Tim Jones-Yevlington, Mark Brand, Pete Anderson, Joseph G. Peterson, Jacob S. Knabb, David Masciotra and Luis Humberto Valadez. And then looking around the county you have BL Pawelek, Nick Ostdick, Barry Graham, Caleb J. Ross and Brandon Teitz out across the Midwest; Michael FitzGerald in Montana; J.A. Tyler in Colorado; Hosho McCreesh in New Mexico; James Greer, xTx, Matty Byloos, Ryan Bradley, Joshua Mohr and Lavinia Ludlow all points West; down South there are your neighbors Jamie Iredell and Collin Kelley; J. Bradley, Nathan Holic and Gregory Sherl in Florida; Alex Kudera in South Carolina; S. Craig Renfroe in North Carolina; Shannon Burke and Corey Mesler in Tennessee; Thomas Williams in Oklahoma; Jason Jordan in Kentucky; Mary Miller and Elizabeth Crane in Texas; and finally, and loosely, in the East, Paula Bomer, Greg Olear, Tim Hall, John Reed, Ken Wohlrob and Shya Scanlon in New York; Mel Bosworth, Laura Cherry, Ray Charbonneau, Rusty Barnes, Steve Himmer and Timothy Gager in and around Boston; William Walsh in Providence; Scott McClanahan in West Virginia; Dave Housley and Karen Lillis in Pennsylvania; Nik Korpon and Michael Kimball in Baltimore; and Amber Sparks in Washington, DC; and that’s a big list and I apologize, but I think it’s a good place to start.

Ben Tanzer is the author of the novels You Can Make Him Like You, You Go Your Way and I’ll Go Mine,  Lucky Man, other works of fiction and non-fiction.
Posted by ctgager37 at 1:45 PM No comments:

Thanks Istanbul Literary Review and Google

Two poems which came out May 2011 were mentioned at the Bagel Bard Group this morning. I saw them out in the world today for the first time.

Please read
Forgiveness
and
Wait-You Can't Hide It
Posted by ctgager37 at 10:27 PM No comments: