On the trolley during Festival
Salem, Massachusetts

For information on the next Dire readings on May 3, June 7 and July 12 go to www.direreader.com.
Posted by ctgager37 at 12:14 PM No comments:

A Bit on the Bombing

A bit on the bombing.

I live in Boston. I love Boston but it was a slow courtship for me as I grew up in New York and went to college in Delaware where basically I crashed and burned. Given that, Boston is now my beloved town but somehow I didn't feel that anything took place in Boston yesterday. Let me explain. The marathon bombing did not feel real to me, as it felt it could have happened anywhere. One week ago, I was at the Boston Public Library, right near the site of the bombing participating in a reading. My mind today does not connect last weekend and yesterday. Yesterday seemed like a movie, a video game set in my town, yet the setting was a perfect one for an act such as this, as there was no way this tragedy could be prevented with the millions of folks placed at an event such as this, without tickets, or turnstiles. Yet it still seemed not to be Boston to me, as I hurt for humanity in every city, not just here.

At the moment, here are the facts: Two bombs went off. There is no known terrorist group taking responsibility, no know suspects, or no known motive. Our news outlets would like to guess at groups or motives. Our citizens who now have access to places like twitter and facebook would like to become news outlets. News outlets such as the NY Post would like to sell papers and report sensationally. As this was playing out the reports were rolling in about terrorist groups, men on roof tops, captured suspects, other bomb sites including JFK Library and a Rhode Island bus station. Reports of victims ranged from 50 to 2. Want it or not, all of this is falls within the abysmal age we live in.

Yet, as I watched three news stations on television simultaneously, this was what I was seeing/reading on facebook/twitter. One person even commented "Yes!" under an under-sourced article the NY  Post rushed up, which said they have a Saudi being guarded in a hospital because they were a suspect. The Post's main bullet points were 12 dead, suspect named and JFK Library was the site of a third detonated bomb. All three of these points are now being viewed as incorrect. There was no, "No!" posted as the facts rolled in.

What was not in the news? The possibility of a single deranged bomber. Didn't something like this happen 18 years ago in Oklahoma City? Hadn't there been numerous singular gun welding terrorists attacking us every few months or so without real motive or reason beyond what was in their twisted skulls? Sure.

My main point here, rather than give my opinion or guess at facts and motives, has more to do with reporting and gullibility. We are all reporters in our own right. The news and media have certain checks or at least they used to but we should all be checking ourselves on facts and sources before we bring information out to the foreground. What happened yesterday made me sick and angry--and the weird and invalid posts, only misinform or fan the fire of fear. This leads to some serious opinion taints and real world outcomes.

Take this for example; a more minor outcome. People want to help so they post "please give blood". Sounds nice, right, except for one thing. The police,  Red Cross and Boston city leaders were all stating because of safety and blood supply, NOT go into Boston to give blood; they were all set, yet this information was getting out there. Should those informed post "no" and the reasons under all these posts. I would have except it felt like strange, nearly asshole-like behavior, to waste time correcting people when terrible things were happening.

Maybe we can learn from this, as the reporting from this evolving tragedy is far from over.  The sorrow today will quickly switch to retaliation, especially if it is proven that there is a group associated with this bombing. The posts I'll read will be, "let's get them" or "make them pay!" and at all costs. This I can predict, as I've seen it time and time again. We must remember, that the brave soldiers and patriots that enlisted after 911, who signed on for revenge and protection, who honestly, and bravely served didn't get what they signed up for. I hope to not see that again and I hope that we as human beings with a voice use a little bit of restraint and a little less hysteria as this plays out in the next few days and longer.

As for my feeling toward Boston, I mean, Anywhere, USA. We will recover, we won't forget but we must form careful and valid points of view during and after all of this sifts out. It is our responsibility to take in the news, and form educated opinions but we must remember that we are not the news, we are not the attention grabbers or the center stage ring masters. In events such as this, we sure as hell should not ever be.

This video is not my poem but I'd love people to notice the line break after "come". I'm very grateful to have the poem, "Meeting With Father" up at Extract(s) today, thanks to Christopher Anderson and Jenn Monroe. The poem is about God, death, natural disasters and what you can believe in.


Also, a thanks to Nate Tower that "Sissy Spacek" was published in Bartleby Snopes today. It was written the night after watching a terrible movie "The Radical" or was it "Katherine" at 3 AM. starring Sissy Spacek Art Carney (Norton) and Henry Winkler (Fonzie). Even the filmmakers knew that it was bad enough to change the original name in order to hide the evidence when it is time to re-sell it.

Just like the movie maker, I wasn't sold on my story's original title, not because the story was bad, as I really like it but because I just didn't like what I had called it. When I read it at the Dire Literary Series, I conveyed that to the audience and someone threw out the title, "Sissy Spacek". It stuck 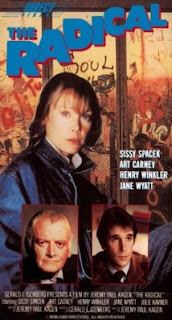 When you're doing a reading at a bar rented for an event and wait staff continue to rattle plates and talk loudly the entire time, sometimes you need to take the bull by the horns. Meg Tuite provides the introduction of two flash fictions. "The Soul Must Go On" originally published in Metazen http://www.metazen.ca/?p=6455 and "Bonfire" from Prick of the Spindle.

The staff interrupted the fine work of this cast. Something had to be done!