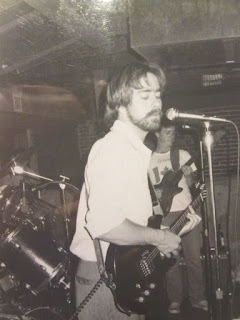 "The most original singer songwriter in his time period"

"Troubled and supremely talented songwriting genius. Coulda and shoulda been more widely recognized, if not for the baggage."

- Most of the Universe 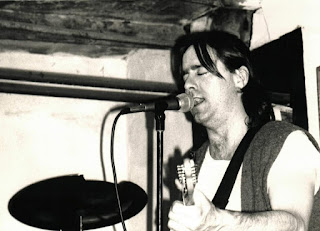 Sometimes when I scroll through Netflix or Amazon Prime Movies there are this music documentaries about musicians or bands that should have made it, and for various reasons did not. Jones Purcell, or as he was known, Woody should have one made about him. He was hands down one of the best song writers I've ever encountered, and certainly one of the best I've ever heard. He was brilliant, funny---could play anything, in any style. Here are some of his songs, but these demos or studio versions of his songs do not give them much justice, as I think there was too much to mettle and play with in studio settings---the music was always better live.

The music posted on Sound Cloud is curtesy of DC Harbold, who said,

"Woody was a complicated brilliant man that I was privileged not only to play with but to call a friend."

So what happened? Baggage? Is that what you call it? 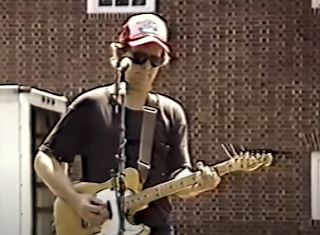 Those who knew him well knew of his struggle with mental illness, although we didn't really talk about it back then. He self-medicated with alcohol which often caused volatile behavior, and although filling rooms with his various bands, he was banned at various venues for his behavior. He was known for being in the band The MIBs, The Ranchers, Kamikaze Posse, The Jones Purcell Band, Pie Hawkers, nu-MIBS, Cornbred--all forces of music in the 80s-90s Delaware Music scene. 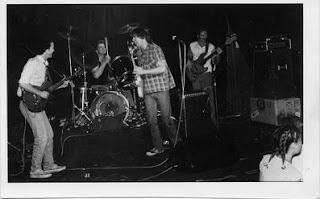 Woody came to the Delaware scene vis South Carolina, brought in by John Baumeister who played with Woody in a band called the Mammals which morphed into the MIBs.

"One Christmas I was visiting my folks in Charleston and found him playing in a place called Captain Harry’s. We went to see him and he started throwing beer bottles at the fireplace and yelling at people. Anyone who knew him would not consider that unusual. So I told him that he should come back with me to Delaware. We had a house in Elkton (the Land Yacht) where he could stay and we could start a new band and just play. This was about 1980/81. So he packed up and came back with me. I was living with Paul Slivka and Jim Hannum among others and so we began the band."

He made tight friends until things would happen, usually he would flip out on them and then bridges were burned. Looking back, we had much less understanding of mental health, and even people in need of recovery were not empathized with much. People always returned though, either drawn in by his talent or 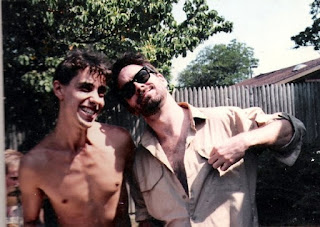 personality. I knew him quite well, and although avoided him after some of his angry outbursts, we would always check in with each other. In 1986 he was looking to move somewhere, and I was living in Lexington, Ma., with my parents, so he came up to play -- maybe start a band. We played all week, but he was down, and in his dry, dark, sense of humor, stated, "I was planning on killing myself, but I didn't want to upset your Mom." The only impression he had made on her was a good one. My mom really liked him.

After that he disappeared for about five years. He moved to Nashville, and didn't really tell anyone. He played, wrote, and worked as a roadie for The True Believers. I was on with my Boston life, by that time but we kept in touch via late night phone calls, and later on social media. Lately he would say or comment, "I'm proud to know you," even when his health began to fail horrible, ending up, in and out of hospitals because of various medical issues, as he needed oxygen now to live, and was having trouble walking.

"So sad to hear. He was such a force of nature and one of Delaware s favorite sons. I'm sure everyone's got a story or two to tell, and I'll be sure to raise a glass to a one of a kind talent. He will be missed."

Yesterday and today there is a lot being said about his music, and life. To say that he suffered through life isn't true or even fair, as he had a huge kind heart when he wasn't fighting off his demons. I never blamed him for having them, though at times I needed to distance myself. Jones, I hope the afterlife treats you like a king, and  I'm proud to have known you.

There will be no documentary, but there should be.

I did not realize he was dealing with mental illness, and was under the impression that the drug/alcohol abuse caused his erratic and sometimes cruel behavior. He definitely was a man of complexity. And a very gifted songwriter. IMO, no other musician or band has ever been as satisfying to listen to as Woody/Jones in his heydey, performing with the MIBs. I miss those times. It's sad that his sublime skills didn't take him to a place he deserved. I loved him, and at times I hated him. His death brings an empty feeling; he will be missed.

Tim ,you knew the same Jones I knew,painted houses working for the same contractor,played with bands on same stages.I could trust my memories on your page & not Facebook,for many reasons,because I always trusted you.So,I bookmarked the page to revisit a few times to give you scenes from when I hung out with Woody that will mean more to you & your readers.Thanks for sharing and allowing me to throw in my thoughts and memories.He's somebody I can't forget.

I had hopes of ghostwriting for Tommy Conwell since I met him in Peotry class 1982,so I follwed him and helped him along.I saw that clearly Paul & Jim were musical brothers,so tight and dynamic duo players,and conceived of stealing them from Woody to join Conwell who had good chances of rocketing forward with the help of Rocket 88 Mark Keneally,his mentor for the BIZ part of getting gigs. Jones had great chops and whipped the band into shape,but had those dark side moments that made him a Delaware music legend.He hired me to drive Tris Hovanec to gigs,and Tris I knew pretty well as a warm friendly guy(RIP)previously played with Rob Rage.1984-85 maybe? And I drove Jones around,not just to gigs on and off for maybe 2 years.There was some kind of "LAST STRAW" moment I can't recall that alienated me from him,like he did to many many good friends who wanted to help him.Burned Bridges.

Jones was a theme park ride,all at once funny,scary,creepy,honest,dishonest,paranoid,defensive,accusing,self-critical,snide,sadistic,macho,boastful,intellectual,but wow could he play his ass off on guitar,sing and compose great songs and was so intense at times yet aloof and felt he was a fraud at times,a poser.Great highs and lows like ocean waves.By contrast I'm low key and even tempered but totally GET the (psychology major)elation vs depression/jeckyl-hyde syndrome/bi-polar aspects of his personality elevated to new heights before my eyes.It kept me on-guard when being around him because he could erupt unexpectedly,and a HASTY exit was called for...my driving services.His fave trip was to the LIBRARY & he'd come out overloaded with books,oh OKAY ,BESIDES the State Line Liquor store/Elkton rd.Pissed me off he'dcall me many Sundays needing a liquor run,when he could have bough booze on Sat....but NOoooo(Blue Laws/no Delaware liquor store sales on Sunday until 1990's).He explained he was such an alchy he couldn't trust himself NOT to drink all he had on Sat nite,so off we go SUNDAY for no good reason.

One thing you could count on when the MIBs played,the musicians would show up in droves to be amazed and left shaking their heads,swapping stories about him,laughing,drinking,singing ,swearing making places melt in a sauna sweatbath hard to breathe.I had limited contact with him then,but that was the BEST of Times.Oddly enough I needed his hot/cold interactions to learn some aspects of bands and music that no-one else could teach me,by example,like a crash course and by no means his intention to teach me all I learned from him.His intensity was magnetic,mystifying.He had romantic entanglements with a few women I knew slightly,but the one who made him ,I think,most even-keeled was Janice,a kind devotee fan who adored him for what she loved about him,and so loyal,despite his temper.She lived with him for awhile in Wilmington and near State Line/Elton Rd Liquors.Pretty much an ANGEL to him,so that wouldn't last.He loved his own demons.

Woody & I swapped lyrics one day when I dropped him at apt where he lived with Cheryl-Marie (one song from late 80's) .My contribution to him was "Golden Gloves" /a few lines that was the core idea/theme...Step into the ring of love and show us what you're made of. What I got from him was monumental."You don't know how it feels to be me." That went into Tom Petty and Tommy conwell songs.

He had tons of stories,rants,angry insults,comdedic satires/mockeries cast of characters he'd scorn with witty imitations.He went overboard to entertain sometimes,when the sullen moody side didn't take over.He was toxic quite a few times to the point where I questioned why submit myself to an abusive person?I enjoyed recording on 4-track with him,even though it was not great stuff,just fun.Sad to admit I was always small-town Delaware and he was more worldly,so he felt and acted superior to me and a lot of others,with the drunken put-downs.Oddly enough I enjoyed it more than I should admit,like a game.It's like a bruised girlfriend who just wants attention,good,bad or otherwise.So,I was his puppet on many occasions,paid ride,paid puppet,played and playing along.