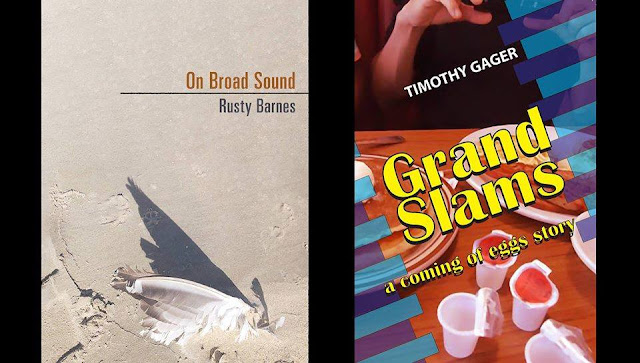 Also of note, even though we are serving treats/drinks…Highland Kitchen is across the street and will be open 5-7 PM

Rusty Barnes grew up in rural northern Appalachia. He received his B.A. from Mansfield University of Pennsylvania and his M.F.A. from Emerson College. His poetry, fiction and nonfiction have appeared in over two hundred journals and anthologies. His flash fiction appears in Best Small Fictions 2015, edited by Tara Masih and Robert Olen Butler. Ridgerunner is his last novel. On Broad Sound, his book of poetry, is published by Nixes Mate Press.

Timothy Gager is the author of twelve books of short fiction and poetry. His latest Grand Slams (Big Table Publishing) is his second novel. He's hosted the successful Dire Literary Series in Cambridge, Massachusetts since 2001 and was the co-founder of Somerville News Writers Festival. He has had over 400 works of fiction and poetry published and of which eleven have been nominated for the Pushcart Prize. His work has been read on National Public Radio. Timothy is the Fiction Editor of The Wilderness House Literary Review, the founding co-editor of The Heat City Literary Review and has edited the book, Out of the Blue Writers Unite: A Book of Poetry and Prose from the Out of the Blue Art Gallery. A graduate of the University of Delaware, Timothy lives in Dedham, Massachusetts.

The making of a novel trailer. A little success, a little failure and a little humor 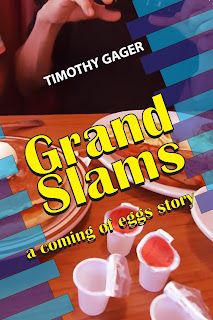 I heard book trailers are important. Here's what I came up with for my novel, Grand Slams: a coming of eggs story.

The original idea was to go to my old stomping grounds Denny's in Lexington. Instead it was a Margueritas now. So where to find a Denny's...

How about Leominster, Ma.?  Perfect. It was even attached to a Motel 6, the same way Grand Slams was attached to a Super 8. Not a huge find, most of them are like that. So I have some ideas about questions to ask, using some of the over the top activities I wrote about. I went into the Motel 6 to ask the desk person if they ever traded meals for rooms--a barter used by Joe Keating to score overnight parties with waitress. Besides not getting an answer, she ran away. Motel 6 charges for wifi anyway.


Then I went next door and ran into the typical Denny's tool bag--their manager, a Keating, Tribuno and Dye-haired Bob in training. This guy represents the people who work jobs they hate and take them way to seriously. There is no sense of humor, which, in a way holds the company line. Even their twitter account has a sense of humor. All I got out of him on film, was him stating his discomfort. I had a whole slew of questions too. He got really paranoid when I asked to film out back in the dishroom, which was denied and then especially paranoid when I asked if he would do it.

I decide a coffee at the counter. I filmed some wide shots, but then the very important manager told me he would ask me to leave if I kept taking pictures because "customers were complaining". Actually, there were no customers in sight, so basically, it was him exerting the little power he had, because he cold. I told him I wouldn't film anymore. I was done anyway

Back to coffee, checking my e-mail and doing phone things. Then boy manager stands about ten feet from me and asks what I'm doing. I say, "what I'm doing, at this point, is being harassed, while I'm trying to drink my coffee" Ah, apparently making friends is tough in the film industry, if you doubt that, ask a right winger about Michael Moore. 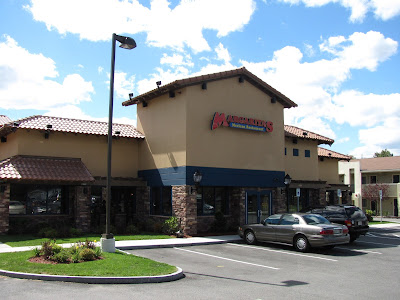 So, failing on my goals, I on to Lexington and Margueritas. Look at that make over---looks like a Denny's with clay roof tiles. At Margueritas,  I planned to film various sections of the restaurant formerly known as Denny's and talk about what happened in each within Grand Slams. I was able to riffle off a few questions to the hostesses (SUCCESS) who had a large repertoire of answers, most of them, the word know, "no". To give them credit, they had no idea what I was doing. I asked for the manager, to get a tour of the dishroom and was rejected rather coolly by her. What a surprise. When I asked if she could do the filming and have control of all the content, there suddenly were two muscle tools in the hostess area. Strong looking dudes, unlike my protagonist, Woody Geyser I, like Woody Geyser have seen my share of hair trigger bouncers, so I took the visual prompt and decided to leave. I was going to buy chips too. Damn.

Anyway, I saved the footage I had and made this grand slamming trailer. It has no mention of any book characters,situations, or conflicts, which would have been an actual hook. It does have some cheesy music and story plaques to follow along with the film--a bit of humor and please excuse the poor sound quality.

Oh, by the way. Below  is a real trailer to compare with mine. Not much difference, right?It's cinematic, in case you missed that part in the tittle.

5 Star reviews of "Grand Slams: A Coming of Eggs Story" trickling in

Read the crits a few 5 star bits-click here- how to buy it.  Here's a rating system I located for references purposes only... 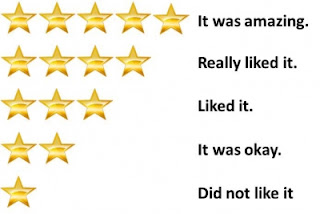 Absolutely Brilliant!
ByJeffrey Milleron February 7, 2017
Format: Kindle Edition|Verified Purchase
Early in Grand Slams: A Coming of Eggs Story, one of the main characters, Maura, says to Woody, a new employee, “You should be grateful that Grand Slams gives you another chance in life. It saved my life.” At that very moment in this brilliant novel by Timothy Gager, he has in two sentences established the critical mass for the story. From that moment in the story, Gager introduces a colorful assortment of characters who have ended up in Grand Slams, for whatever reason, and then delves deep into their lives and personal relationships—of all who are connected to the restaurant.

In many ways, the restaurant itself becomes a microcosm of life through the individual stories of these employees. Gager is brilliant the way that weaves the stories of the employees throughout the story and how each one is inextricably linked to other characters in the novel. From Maura, the veteran food server who has been with Grand Slams from the very beginning to Woody Geyser who is only working part-time during the summer, the interactions between these characters as they unfold are what makes this novel a treat to read. While reading this novel, I was reminded of that classic American cyclical novel, Winesburg, Ohio and the way that Sherwood Anderson linked the characters and their individual stories with each other. The same can be true about Grand Slams with each chapter having its own title as if each one could be a stand alone story.

This is by far, Gager’s best work. He’s a writer of extraordinary talent and one we should all read.

funny, tense, and even tender
ByD. S. Atkinsonon December 8, 2016
Format: Paperback|Verified Purchase
I do have a soft spot for pancake house centered fiction, but I also have high standards. Gager puts together a beautiful one in this book though. It seems so realistic of that kind of place at the time that it's funny, tense, and even tender. I cared about these people and what would happen to them as if they were really people I knew well. Very well done.

Great story
ByW. Mahoneyon January 6, 2017
Format: Kindle Edition|Verified Purchase
Having worked in a restaurant very similar to Grand Slams, I love how Mr. Gager captures the lives of those poor, struggling souls, floundering along in a nothing job yet trying to find some meaning. Mr. Gager gives us characters we come to care about, and he brings them to life with sparkling dialogue that is at once witty, engaging, and even poignant. You will laugh, enjoy, and become absorbed in this story about every day people and the stories that bond them. Well done.

Kayak Kenny!
ByRusty Barneson January 2, 2017
Format: Paperback|Verified Purchase
Anyone who's worked in a restaurant will recognize characters like Kayak Kenny, as well as Gager's description of the hot stink of the dishwashing station, among other things. This is a great book by Tim Gager, whose novels keep getting better.

As I said last night at Dire, writers love the praise, but they really love book sales, so thank you in advance!