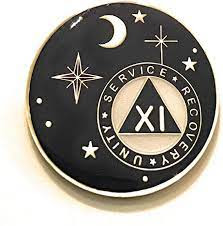 If I ever once thought that anyone or anything could give me "the moon and the stars," it would have taken an army to convince me. But here we are, and the picture to the right is what I have today, eleven years of sobriety. It really feels like I've been given the moon and the stars because after I got past the early nightmare of "getting sober" my life has been boundless, with limitless possibilities

Our planet is a lonely speck in the great enveloping cosmic dark. In our obscurity, in all this vastness, there is no hint that help will come from elsewhere to save us from ourselves.

Well, Carl, I'm feeling you, as I did get help, and it did come from  within that lonely speck called Earth, because I couldn't get it done without other humans as well as elsewhere than that.

In the best-selling anthology, The Epiphanies Project, included essay of mine was published about when the stars aligned in order for me to seek help. I won't tell that story here, because this blog isn't about that,  but check it out when you get the chance!

As they say, no one rushes into their first AA meeting as if they are the center of a ticker-tape parade, and full of celebration. No one runs in euphorically and shouts out with excitement that they are there. Like everyone else who had done this, I was broken, and desperate, slithering in, wanting help but hoping not to be noticed.

Also, by accepting all this I had to realize that my life as I knew it was over, and I was to accept my 'punishment', which was what I was doing for the life I had been living. My punishment was having to go someplace in order to be helped. I would hang out with all of the other losers being jailed for what they did as alcoholics. Life was going to be bleak, and depressing hanging out with all of those defeated people.

After forcing myself to continue and not give up or give in I began to notice a few things. I began to notice that these people weren't suffering but were pretty damn happy that they no longer having bad things happen to them. People were also grateful for little things, more spiritual in their own individual way, and less self-centered. These were good people who were sick, and they were great for wanting to get better.

As I learned to accept the new me, and I discovered that I liked who I was. I learned to listen and to help others, and that what I was doing was treatment or medicine, not punishment for years of drinking irresponsively.  And now all these 24-hours, a little more than 4,000 of them, all the way up to today, November 6, 2021---it has eleven years since I last had a drink, and my life is as good as it has ever been.

Just saying, I was given the moon and the stars, it just was on a medallion, and I didn't have to land on the moon, nor was it a "GIANT LEAP FOR MANKIND," but it was a big one for me, which was as personally miraculous as going up in a rocket and walking around in unchartered territory. 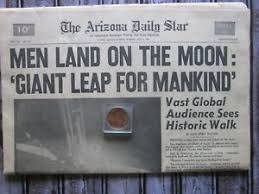