We sold 11 tickets, so The Last Bookstore canceled the event. Then Amy, Erica, and Jen Hitchcock, from Book Show LA stepped in to host us on May 10, 7:30 at their store on 5503 N Figueroa St, Los Angeles. No ticket. No purchase necessary. Full refunds offered by The Last Bookstore. Win

So check out Amy Dresener and Erica's Garza's sand if you are interested buy them. (use your refund money too)

-----------------
The Last Bookstore Book Show LA presents three authors, in recovery, and all with remarkable stories, on how they lived. Dresner, My Fair Junkie - A Memoir of Getting Dirty and Staying Clean, and Garza, Getting Off, are well known for their memoirs, while in Gager's Every Day There is Something About Elephants, he uses his tools of recovery in the craft and subjects matter of his flash fiction writing.

My Fair Junkie A Memoir of Getting Dirty and Staying Clean - In the tradition of Blackout and Permanent Midnight, a darkly funny and revealing debut memoir of one woman's twenty-year battle with sex, drugs, and alcohol addiction, and what happens when she finally emerges on the other side.

Every Day There is Something About Elephants - Gager's book consists of 108 flash fictions, ranging from 72 to 1,159 words. Every story has appeared previously in print or on the web. The stories show the range within the form of flash fiction, from narrative poem, shorter short story, to trips to bizarro-world where strange events evoke solid meaning and metaphor. Timothy has had over 500 total works features and these 108 are the best of the best.

Amy Dresner is a former professional stand-up comic, having appeared at The Comedy Store, The Laugh Factory, and The Improv. Since 2012, she has been a contributing editor of the online addiction and recovery magazine TheFix.com. She’s also written for the Good Men Project, The Frisky, Refinery 29, and has been a regular contributor to Addiction.com and PsychologyToday.com, where she has her own addiction blog entitled “Coming Clean.” My Fair Junkie is her debut book. Visit her website: www.amydresner.com


Born in Los Angeles to Mexican parents, Erica Garza has spent most of her adult life traveling and living abroad. She currently lives in Los Angeles with her husband and daughter. Erica’s essays have appeared in Salon, Narratively, BUST, Marie Claire, Good Housekeeping, Refinery29, Bustle, Alternet, Vivala, HelloGiggles, the Los Angeles Review, and Australia’s Mamamia and The Motherish. She has appeared as a guest on BBC Radio 4, Thom Hartmann’s The Big Picture, and August McLaughlin’s Girl Boner Radio. In 2010, she earned her MFA in Creative Nonfiction at Columbia University. Her memoir on sex addiction, Getting Off, is her first book.

Timothy Gager is the author of fourteen books of short fiction and poetry. Every Day There Is Something About Elephants, a book of 108 flash fictions, selected by over fifty-five editors, was released by Big Table Publishing in 2018. He's hosted the successful Dire Literary Series in Cambridge, Massachusetts since 2001 and was the co-founder of The Somerville News Writers Festival. He has had over 500 works of fiction and poetry published and of which thirteen have been nominated for the Pushcart Prize. His work has been read on National Public Radio.

Flash Boulevard gives a sneak peak for those interested in Elephants 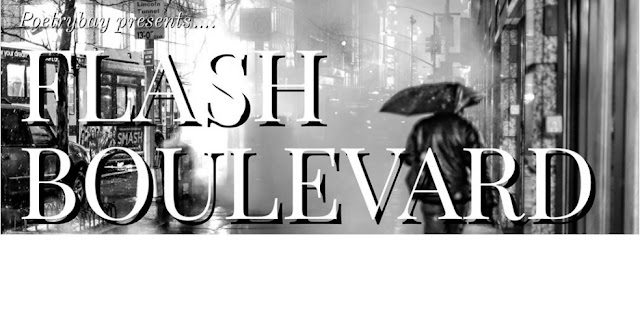 George Wallace's Poetry Bay, which I've had poems appear in has a flash fiction arm, Flash Boulevard, edited by Francine Witte. When she reached out for my work, I suggested using 3 of the 108 stories from Every Day There is Something About Elephants

You can read them right HERE

The three, Every Day There is Something About Elephants, originally appeared in Smokelong Quarterly in 2011. Continuum originally appeared in Connotation Press in 2012, and Simplicity is Beautiful is here making its debut.  All appear in the book Every Day There is Something About Elephants So if you like what you see on this Boulevard, stop into a bookstore and buy a copy.
at April 07, 2018 No comments:

Nourish-Poetry publishes "My Name is Paul. (after Trouble Boys)" in their very first issue

According to EGW Publishing: This first issue features over 70 poems, over 50 haiku and includes poems and haiku by the following authors: Juan Felipe Herrera (U.S. Poet Laureate 2015-2017), Roald Hoffman (Nobel Prize winner in Chemistry 1981) and Naomi Shihab Nye (Chancellor of the Academy of American Poets 2010-2015). Poetry is in the air, in the dirt, in the bugs and butterflies, in your old shoes and truck, in the fabric of what it is to be human. During these politically charged times, so much of what is printed confines your thoughts like a bird in a cage, poetry liberates that bird into the sky. With our mutual love of poetry, please help us to spread the word, sow the seeds, pollinate the flowers and set the birds free. 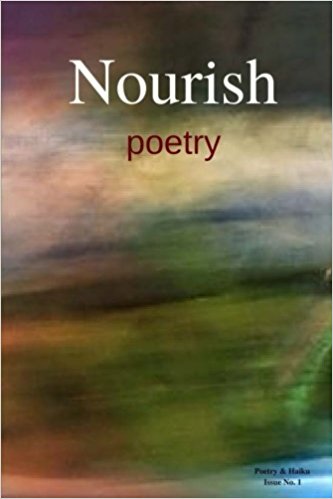 My poem, My Name is Paul, was included in the Nourish-poetry Issue 1 anthology. The poem, also published in the book Chief Jay Strongbow is Real , is a "found poem" based on the lyrics of Paul Westerberg,, and was written after I read  Trouble Boys by Bob Mehr. 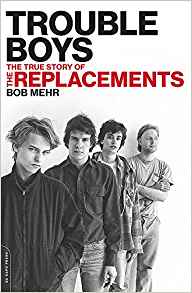 today, there’s a four year old boy
still hiding, If someone comes seeking,
I'm here, but they can't see me.

found here (which I believe was a tribute to the late Bob Stinson):

Extra, Extra, read all about me on the front page of my hometown, Dedham Transcript, this week. 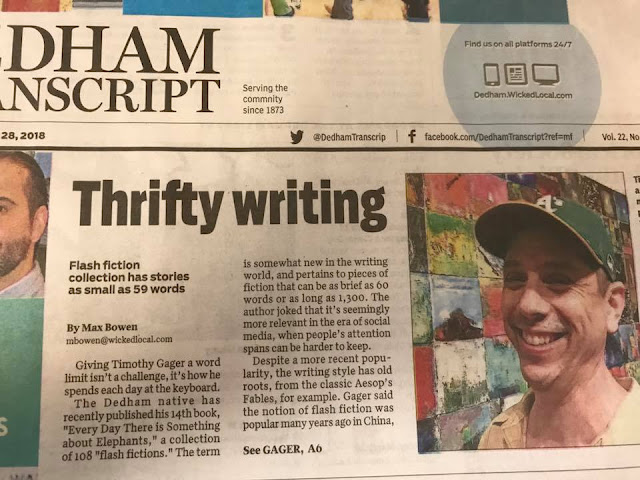 
I believe this is the first time I've been outed in Dedham, Ma. outside of the writing community. When my very first book, the electronic, The Damned Middle, was published, I was in the Wellesley Townsman. After that, it there was, thanks to Doug Holder, many appearances in the Somerville Times. Anywho--Max Bowen did a nice job on this.
After then interview was done we spoke about the declining newspaper business, and how local papers such as the ones mentioned above, are thriving. Locally, newspapers offer what cannot be offered or reported electronically or with alert notifications. They have a certain niche which can go further than articles on Aunt Mabel's bake sale (even though I love Aunt Mable and baked goods). Newspapers need advertising and low overhead. Thumbing through the Dedham Townsman, Max's name is all over it. He may be the only writer on their staff, which makes it a full-time writing job, and not an easy one at that. Thanks Max, for determining my fitness to print. 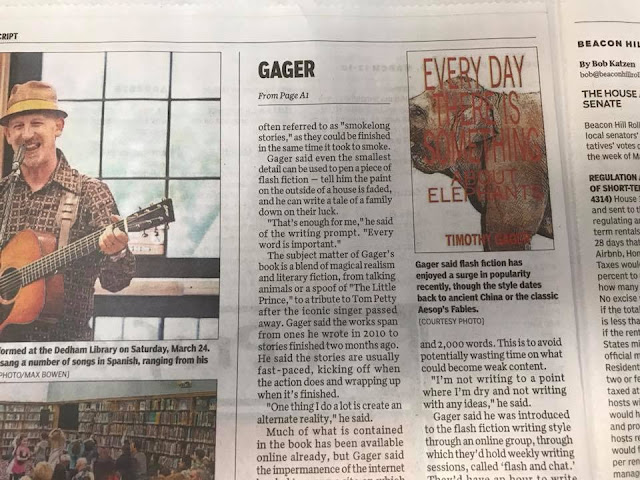 Thrifty Writing by Max Bowen
Giving Timothy Gager a word limit isn’t a challenge, it’s how he spends each day at the keyboard.
The Dedham native has recently published his 14th book, “Every Day There is Something about Elephants,” a collection of 108 “flash fictions.” The term is somewhat new in the writing world, and pertains to pieces of fiction that can be as brief as 60 words or as long as 1,300. The author joked that it’s seemingly more relevant in the era of social media, when people’s attention spans can be harder to keep.
Despite a more recent popularity, the writing style has old roots, from the classic Aesop’s Fables, for example. Gager said the notion of flash fiction was popular many years ago in China, often referred to as “smokelong stories,” as they could be finished in the same time it took to smoke.
Gager said even the smallest detail can be used to pen a piece of flash fiction — tell him the paint on the outside of a house is faded, and he can write a tale of a family down on their luck.
“That’s enough for me,” he said of the writing prompt. “Every word is important.”
The subject matter of Gager’s book is a blend of magical realism and literary fiction, from talking animals or a spoof of “The Little Prince,” to a tribute to Tom Petty after the iconic singer passed away. Gager said the works span from ones he wrote in 2010 to stories finished two months ago. He said the stories are usually fast-paced, kicking off when the action does and wrapping up when it’s finished.
“One thing I do a lot is create an alternate reality,” he said.
Much of what is contained in the book has been available online already, but Gager said the impermanence of the internet has led to many a site on which his work was featured no longer being active. He added that the book gives fan a complete collection of his flash fictions, should they have read a few and want more.
“If they’ve read some, they may like the rest,” he said.
Flash fiction is far from the limit of Gager’s skill. He’s published novels — his last three releases have been in this format — as well as collections of poetry. In some cases, a bad piece of flash fiction can be transformed into a good poem, or even into a novel, as was the case with a prior publication, “The Thursday Appointments of Bill Sloan.” He likes to dive right into his work and tries to write each day, but limits himself to between 500 and 2,000 words. This is to avoid potentially wasting time on what could become weak content.
“I’m not writing to a point where I’m dry and not writing with any ideas,” he said.
Gager said he was introduced to the flash fiction writing style through an online group, through which they’d hold weekly writing sessions, called ‘flash and chat.’ They’d have an hour to write something, after which it would be reviewed and critiqued. He said that this and other workshops helped him to develop his voice as a writer, after which it became much easier for him. A few of the stories written in the flash and chat gatherings made it into his new book.
“I always like working with people that are better than me,” said Gager. “I learn a lot.”
Gager is the author of 14 books of short fiction and poetry, has hosted the successful Dire Literary Series in Cambridge since 2001 and was the co-founder of the Somerville News Writers Festival.
at April 01, 2018 No comments: