In Appreciation of author Jim Bouton 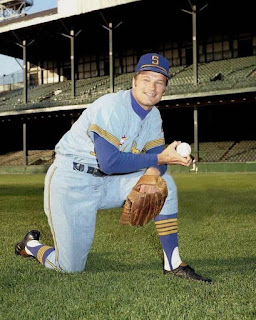 Jim Bouton was a pitcher, a World Series hero, an inventor, and businessman (inventor of Big League Chew), a television sportswriter, an actor, a script writer, and the author of one of the most groundbreaking baseball books of all-time.

When I was twelve I found nestled in my parents bookcase, alongside of Joseph Heller, John Updike, William Faulkner, Joyce Carol Oates, and most of the Heratio Hornblower series, a copy of Ball Four by Jim Bouton.

Ball Four is known as the first "tell-all" book and baseball. It blew the doors off iconic, idolized players, and the idealism of the sport itself. It did so in a hilarious and honest way, and it was a book which celebrated everything I was, or would become interested in---baseball, partying, practical jokes, with the stories of being on the road, and of sex, drugs, and alcohol. For more info on Ball Four, please see the Youtube video posted below, with Jim, by ESPN. 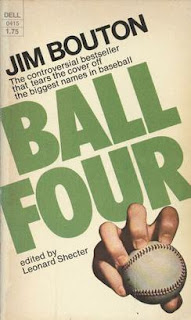 Because of this, baseball ostracized Bouton, making him a "social leper," causing  the Commissioner of  Baseball, Bowie Kuhn to meet with him, asking him retract publicly the content of the entire book as pure fiction. A former NY Yankee, Bouton told the truth about Hall of Famers, Mickey Mantle, Billy Martin, and Whitey Ford, revealing them as being hung over for games, and chasing women. Baseball couldn't handle the truth, as it was in the hero producing business, where  each locker rooms had a posted sign which read, "Whatever you see here, whatever you say here, let it stay here." Bouton went up against the establishment, called B.S., wherever he saw it, and was also viewed as a hippie, and a commie by many in baseball because of his liberal take against the Vietnam War and political hypocrisy.

Bouton wrote Ball Four in 1969, in diary form, recounting the 1969 season he spent with the Seattle Pilots, and Houston Astros. The Pilots were a Major League Baseball team which lasted only one year, 1969, and in 1970, became the Milwaukee Brewers. During that year, he carried a small notebook in the back pocket of his uniform to jot down anecdotes as they came up. He also would write on napkins, popcorn boxes, and anything he could get his hands on if need be. He never told teammates what he was up to, but word managed to leak out.  Pete Rose would yell, "Fuck you, Shakespeare," to Bouton whenever he would pitch, to which Bouton would later relish Pete Rose actually making a literary reference.

The humor, content, and structure of Ball Four, made it one of my most influential and favorite books, and Jim was one of my writing heroes. It was a book that at one time, I would read every summer during baseball season. My own book, The Thursday Appointments of Bill Sloan, was originally titled The Diary of an Unethical Psychologist, although mine was fiction, it used, before revision, the same structure, and tone as Ball Four. 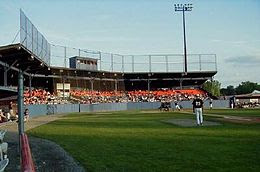 Through the years I've had various encounters with Jim. His e-mail BOUT56@aol.com always made me smile, noting his Seattle uniform number. When Foul Ball was released in 2003, another Bouton diary, about the planned demolition of Wahconah Park, one of the oldest ballparks in the United States, and scheduled to be replaced with a new stadium paid for with public money, Bouton again went after the establishment, and formed a group to renovate Wahconah, complete with local food courts ("The Taste of the Berkshires"), and luxury boxes at no cost to taxpayers. As of July 2019, neither of these plans were followed through by the town of Pittsfield and Wahconah, still decaying,  is still standing. 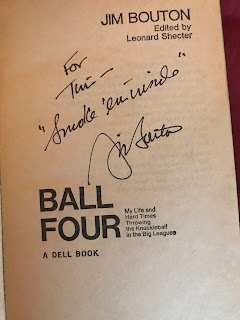 About that time, I attempted to get him to be the main feature at The Somerville News Writers Festival. He had the drawing power, and entertainment ability which would have been a perfect fit. The date didn't fit his schedule and he politely declined, writing that I was doing a good thing for writers, and how books were very important to him in his travels as a baseball player and businessman, but he noted, that it was another reason for some of his less literate teammates to poke fun at him. When he did come to Boston for a reading that summer, I took the day off and saw him at the Downtown Crossing Barnes and Noble. After the reading, as I approached with my usual, "Hi, I'm Tim Gager," he stopped me and said, "Ah, we've e-mailed," then he signed my copy of Foul Ball, and my copy of Ball Four (with 'smoke 'em inside, the phrase Seattle pitching coach Sal Maglie used as the tactic to pitch to every single hitter in baseball.") In Foul Ball in wrote, "Watch out for Bulldozers," a reminder from Foul Ball, that gentrifying towns, and renovating areas wasn't always what it appeared to be, it was always a case of following the bulldozers to the money. 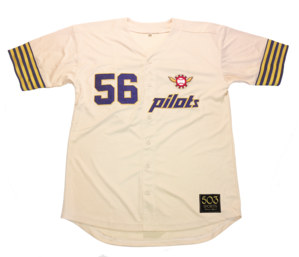 Last  December, my son, upon my request, gave me a Seattle pilots Bouton jersey for  Christmas, and I attempted to visit Bouton, where in lives in Great Barrington, Ma.,interview him, and have the jersey signed. I found out he had had a serious stroke a few years back, was suffering from dementia. He was not doing well. Fifty years after the season of the Seattle Pilots, and  one day after the Major League Baseball All-Star Game, James Allan Bouton passed away.

Marvelous homage, Tim. I also admired him, but not as intimately as you managed.

I love those kind of rebels too.

Thank you for this,

Bill Lee smoked a lot of dope....rumored to, of course.