Published in The Long-Islander News, for the second time since 1838, thanks to George Wallace 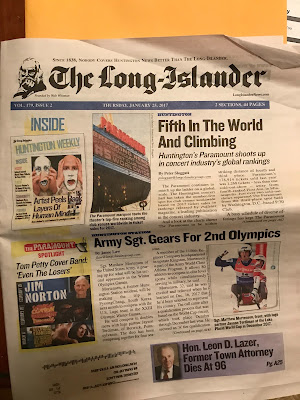 I grew up on Long Island, very close to Huntington. A newspaper published there (since 1838), The Long-Islander News, is a really strong local paper, and if you're a follower of journalism, the local papers are in the best position for making money. Can you say niche?


George Wallace is someone I consider a friend, and a generous man. He's the former Suffolk County Poet Laureate, and runs a whole slew of readings, which I've been honored to have been invited too. George has also featured at my Dire Literary Series, reads in Lowell for the Kerouac Festival and was selected to be in my panel for MassPoetry, representing beat poetry. (the panel was rejected...the usual suspects are picked, few are chosen.)

So today in the mail, I received a copy of The Long-Islander with my poem, Concerto included in Walt's Corner. (not Disney or Frazier obviously, but Walt, who happens to be #3 on the famous Walt list) . 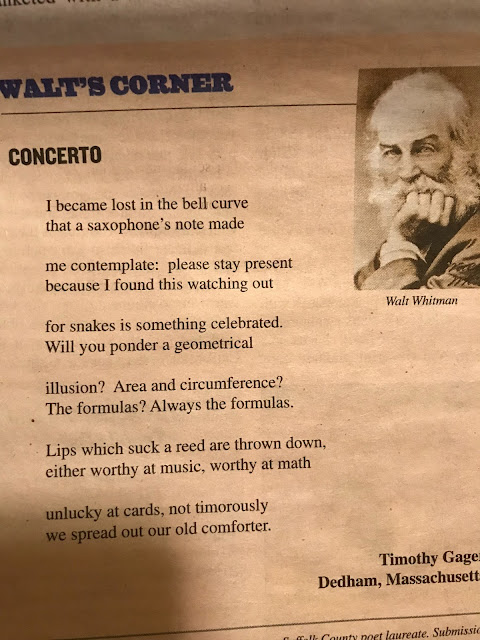 I would tell you to run out and get your copy but the issue came out on January 25, 2018, so you couldn't even if you wanted to.

Note: The issue says January 25, 2017, but they forget to change their calendar annually (Spring ahead, January back?) . I'd hate to think my old friend, Long Island, is behind the times.
at February 09, 2018