Kleptoparasitic published in Boston Literary Magazine, and the story behind the story (poem). 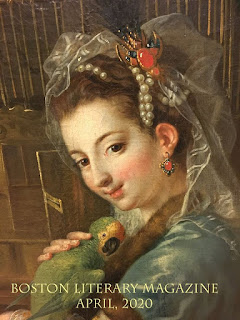 I am happy to announce my poem, Kleptoparasitc was published in Boston Literary Magazine

To hear the poem, look further down this post.

So, let's review the story behind this poem.

Definition
noun
A form of parasitism wherein an animal takes food or objects collected, caught, prepared, or stored by another animal

On February 4rd, 2020. I finished a draft of a poem called Kleptoparasitic, which I was using spiders (teridiidae) as a metaphor for the parasitic relationships within death and the afterlife, both physical and spiritual. That night I went to the TD Bank Garden to watch the Bruins play among 17,000 or so others. As of that Monday there were only 11 known  cases of COVID19 under investigation in the United States. Our President thought this indicated nothing to worry about, and did nothing
11 known cases
I attended a hockey game
How times have changed. We all know what is happening, today, on April 15, which is no longer "Tax Day." The last two lines of the poem (below) which appears in The Boston Literary Magazine (use this link), seems to  predict the future, as presently people are dying alone in hospitals or in quarantine.

unlike the Theridiidae, we beg
to hold the dying.
Here is me reading the poem on March 22, (pre-self-inflicted-isloation shave) where  on this day 27,051 new cases were reported in the United States
Today, April 15, this is the look, and today there are a total of 609,000 confirmed cases in the United States. I am at home, and staying there.