Tomorrow will be Nine years of sobriety....so here's my story, and also an appearance on podcast, Recovery Happy Hour 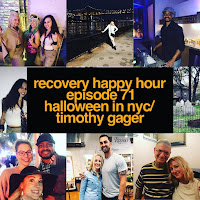 So tomorrow is another day, but it's also a day that I'm nine years sober, and on a great podcast,  hosted by Tricia Lewis!

Listen to a podcast that came out today called
Recovery Happy Hour
(click the above link and listen. I come on at the 7 minute mark)


I didn’t know where the  friends I came with were but the next day they were no longer my  friends on the account of my behavior.  One of the people that left me during that night, a night that I hardly remember, went home and overdosed.

Today, all I know, because I can look it up, is that I hosted The Dire Literary Series that night which featured Victor David Giron, Michael Atwood and Leo Racicot. 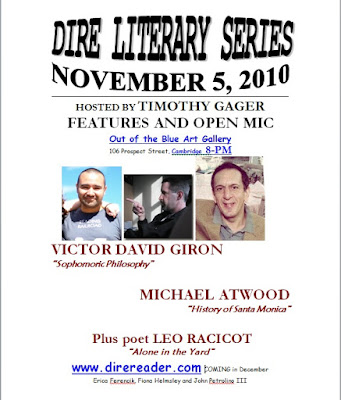 I also know that my drinking had been bad for a long time. I’d been blackout driving for the past year. People would call me the next day saying they’d been on the phone with me during these times and were worried that I was going to die and probably take people with me.  During one of these phone calls I told someone I was entering the Mass Pike in the wrong direction.

I survived that night but I had taken people with me. Besides alienating friends, my children told me that they were afraid to spend time with me. I had swings of anger. I embarrassed them when I was drunk.  On November 6, 2010, I woke up feeling horrible and desperate. I decided to give it a honest attempt at becoming sober.  I attended a 4 PM meeting in Needham and so far, I have never had another drink.

Since then, I’ve been happier. My moods remain for the most part pretty stable. I have support from others. I am a better person. I have some good friends I can tell anything to. Most of all I’m not afraid to be honest. This is the greatest gift. Being honest isn’t that bad at all and by doing so, life is much easier.

Tomorrow will be nine years without alcohol, but it’s not about the years, it's about living through each day--all    of them. Keeping the thoughts to only one day is pretty easy. In hindsight, I should have held off posting this until another six days, but I get very reflective upon things that happen to me.

There have been some big challenges recently in my life, which in the past would have been devastating and destructive to me personally. Instead, I’ve been able to think about how grateful I am for my life, rather than focus on the negatives, such as what I have lost or almost lost.  These recent events in my life have really sucked. They have made me upset angry and most of all, sad. I am able to see that these are real and honest emotions. Life is full of real events. Not every day is good and often it is far from it, but life is life, and I can't control that either–but I’m here…I’m alive…and I love.