HOST: The Dire Literary Series is a laid back series not like any you've experienced. If you need to use the bathroom, please get up, it's back to the right. If you need to smoke, please go outside anytime you wish. Readers, the door may open during your reading, and the cooler might make noises from the ice when I pull beer out for someone so don't freak out about it. Also, if you'd like a beer, raise your hand and I'll bring one to you. That's me, the host, and that is how it starts. This is how it always starts.

The series itself started with an idea for a fiction open mic as there were none in all of Boston that readers could read for 15 minutes a shot. And with an ad looking for features which no one answered, it was on!

If you are a published writer and live or can travel to the Boston area I need authors interested in becoming a featured reader at the Cantab Lounge on a Thursday Night. Advertising for your event will be in The Boston Globe, Boston Herald, The Improper Bostonian Magazine and The Boston Phoenix. All interested please e-mail me at ctgager37@yahoo.com

At first we had two hosts, myself and John Bailey. We had a wacky idea that we were going to perform a variety show with music, readings and comedy.  There was no Facebook but there were newspapers and paper fliers to tack up. John and I had planning meetings. We needed a name for the event so we went to a bar in Burlington and drank. What we came up with reflected the dire need for a series of this type, but it also reflected the amount of drinks we'd had. Thus the original name (still found on the web address, direreader.com) was The Dire Reader. Within the first year, the series needed to be taken seriously, so I called it just, The Dire Series.


The first Dire Reader occurred in February 2001. I have one picture of the event (me drinking a beer) which featured Alex De Suze, who didn't read, but instead acted the short version of her play, "Single What? Female".

The event was sparsely attended by my poker buddies, a few family members and one person from my office Frazer, who brought his son, Jesus Maclean, whom was a writer. Not a single person signed up for the open mic so I had Jesus and some others read my work (without mentioning that) to fill time. Oh, we had the skits too. One of the skits involved John and I as the Zoom kids in prison making hooch out of toilet water. We sang the Zoom theme and ran around the stage like airplanes. Hence, Dire had immediate growing pains. In a few months it became apparent to The Cantab that it wasn't catching on  and no one was drinking to give them the business they wanted so I was "canned" from there.

I looked for a new home. At another reading I ran into Gary Hicks who told me about the Out of the Blue Art Gallery. I went to 168 Brookline Avenue, met Tom Tipton and Deb Priestly and in less than five minutes they told me that it was all set. I could host Dire, the first Friday of every month. Meeting with them to get the series moved and working with them has remained just as easy. Below is Tom from 2008 from the first cut for the documentary film "Out Of The Blue." Filmed and produced by Alexander Riback, Stephanie Waters, Melody


Back then the gallery at 168 Brookline Ave. looked like this: 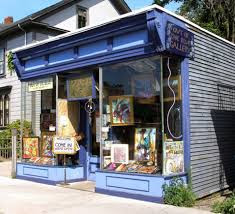 If you know the building at 106 Prospect Street, where it is located now, Tom and Deb have replicated the old 168 Brookline Avenue building perfectly. The Prospect Street is a much better as it is closer to the Central Square T station. The Brookline Ave building was a ten minute walk from The Middle East Restaurant. At the gallery, I said goodbye to John Bailey and added a second feature and decreased the feature time to 30 minutes. The open mic was shortened to an hour. Later on in in 2004 I added a poetry feature as well.

The second or third month at 168 Brookline I had Doug Holder as it feature and it snowed twenty inches. I didn't cancel and about ten of us sat around and told stories. The first Dire held after 9/11 was a somber affair and was poorly attended. It was a time that people weren't leaving their houses much. In 2005 I featured "A Day in the Life: 9/11/01" by Neil Kenneth Goodchild who lost his sister in that tragedy. The reading, attended by his family,  broke my heart.

Suddenly in 2002, the Dire was the thing. We were reading to full houses. We were getting great writers such as Sue Miller and Steve Almond--and the buzz was on! In July, in the second  year, I held the first Dire BBQ. I didn't announce it, as it was on a whim, but it was held during a regular event where I stuck a cheap portable grill with screw in legs in the front of the gallery (no backyard in the old place)

and had my roommate Bob play music. Unfortunately, the grill was flattened by someone we observed from about a quarter mile down Brookline Avenue from Central, zigging and zagging in a drunken pinball state.  After numerous warnings were ignored he fell directly on top of the grill. Bob and I peeled him from the hot coals. The next BBQ was at the new site, which had a gas grill, and featured heavy hitter Tom Perrotta and Gary Kadet who wrote D/S: An Anti-Love Story.  According to Kirkus Reviews, here's D/S:  Fade in on Perry Patetick, the anti-hero of this so-called anti-love story, as he's about to lose his newspaper job and drift into the world of S&M, in particular D/S--D for Dominance, S for submission.

No one was prepared when Gary showed up in full leather and a bull whip, which he snapped while reading passages from D/S. Tom Perrotta was extremely wide eyed during the whipping.


The Out of the Blue was becoming known for all of their poetry and art events but also for their pets, Bear the dog  and two cats. During Dire I place them down in the finished basement  because I don't want my guests to be suffering with allergies. At first you could hear the cats fighting and carrying on during the readings.  Two other times, I couldn't account for the animals. The first  was during a Steve Almond reading where smack in the middle of it, Tom Tipton walked in with Bear on a lease and a cat in his arms, which during a pause for breath by Steve, meowed. Steve's reading sounded: Sadly, B.B. is not much of a kisser. He presses too hard, and he doesn't know how to modulate the whole mouth-opening-tongue-moving-forward thing. All effort and no technique, which is  (MEOW) A DOG and THERE IS A CAT MEOWING and A FUCKING MAN WALKING IN, DURING  MY READING OF THIS STORY!"

Another warm summer evening, I had the back door open and one of the cats entered with a big bloody rat in her mouth. Cats can be proud animals and he was the proudest  dude ever. He pranced to the reading area and dropped the dead animal near the reader. All hell broke loose and the audience panicked. Chairs were overturned and people were screaming. I grabbed a broom and doing my best Bobby Orr impersonation; a perfect hockey slap-shot, and the rat ricocheted out the open back door. Score!

Around 2005, the Series started to do poorly. The newness was wearing off. I considered quitting. Then it picked up again with the help of friends and word of mouth. Also tools such as Facebook and Myspace made it easy to direct interested people to the event and it was packed again.

Along the way Dire picked up a 2008 Best of Boston Award.  I was honored, humbled and thrilled. The write up was exactly what I had envisioned Dire to be years ago. Finally, The Dire Literary Series was being taken seriously for being what it was and what it was meant to be. The most recent interview about Dire was held in November, 2010 when Fictionaut interviewed me about the Dire.

On February 4, 2011 I am doing it for the 120th time . In that time I've met so many fabulous writers that have featured and read in the open mic. The quality of the open mic never fails to impress me. I've had numerous open readers come back and feature when their books come out! Many have had long runs at the open, my favorites Murray, the IRS investigator and Bob, the cop, no longer come, but good people continue to come and they're the ones I continue Dire for.
Posted by ctgager37 at 11:56 AM

Email ThisBlogThis!Share to TwitterShare to FacebookShare to Pinterest
Labels: dire, direreader, memories, out of the blue art gallery, Tom Tipton

I just loved reading about Dire's history! Am going to forward this on to my niece, a Chef-in-training who lives in the Boston area. If I can't ever get there, maybe I can coerce her to make an appearance one day on my behalf.

Again, big congrats, Tim!! Am glad you never gave up!